Playing cards illustrated by the greatest science fiction and “heroic fantasy” artists of the moment, the blockchain to make them unique digital works, and a series of novels to accompany the story… Welcome to the fairytale universe of Cross the Ages.

Conceived by the young Marseille-based startupper Sami Chlagou, who is already behind a video game distribution and production company, this project aims to turn a generation’s passion for trading cards and role-playing games into a business as disruptive and speculative as the cryptocurrency market.

The 30-year-old is no novice. Since the age of nine he’s been collecting Magic: The Gathering cards, one of those games — like Pokemon, Dungeons and Dragons, or Warhammer — that brings together millions of fans around the world.

This game, imagined by the mathematician Richard Garfield in 1993, has become a worldwide succes because of the number of its protagonists (more than 20,000!) who cast and counteract many spells in a moving space-time as well as the immense complexity of its rules that evolve over the course of the game.

Researchers from the University of Georgia and University of Pennsylvania recently compared it to Go and Chess, which, unlike Magic, have defined limits such as board size. To do this, the two study authors coded the powers and properties of each card and had a computer analyse a two-person game.

In the case of chess, determining a winning strategy is calculable. “But with Magic it’s impossible because of the enormous number of assumptions,” mathematician Stella Biderman, who organised the experiment, explained. “This game has the highest known computer complexity quotient.”

To play, you need to build up a collection of at least 60 cards, which you can buy in stores where they are sold in packs of 15. In each pack, eleven cards are common, three are less common and one, a rarer version, gives superior powers. For the fans, of which there are more than 20 million worldwide, building a winning hand is a never-ending quest.

“You have to make each card work in symbiosis with the others and give some cards decisive advantages,” says one player.

The oldest cards are the most sought after. Wizard of the Coast, the publisher of Magic (acquired by Hasbro in 1997), has reserved 572 of them that will never be reprinted. The only way to get them, therefore, is in the second-hand market, and the prices are skyrocketing.

In late January, a very rare, and mint condition (with a PSA rating of 10) copy of the game’s Alpha Series Black Lotus card, of which there are reportedly only seven copies in the world, was auctioned off on eBay for $511,000. “That’s how high the rarest of the rare can go,” another player enthused.

Most read: How to Make Upgradeable NFTs

Three cards in particular are awaiting their listing: Proposal, Splendid Genesis and Fraternal Exaltation, each produced only once to mark three key movements in Richard Garfield’s life, namely his proposal and the birth of his two daughters.

The T206 Honus Wagner baseball card, of which fewer than 200 copies were issued in 1909, rocked the market when it sold for a record $3.751 million on May 23. “The same madness is lurking for the Magic cards,” says one investor.

It was an American collector, Jonathan Medina, who launched their speculative movement in April 2010, recounting in lengthy posts his search for the “pack to power” to achieve the ideal hand he was striving for. By trading sets of cards around the world 98 times, he writes that he managed to collect several of the out-of-print editions he was striving for, including a Mix Pearl, one of the nine extremely rare cards printed in late 1993. 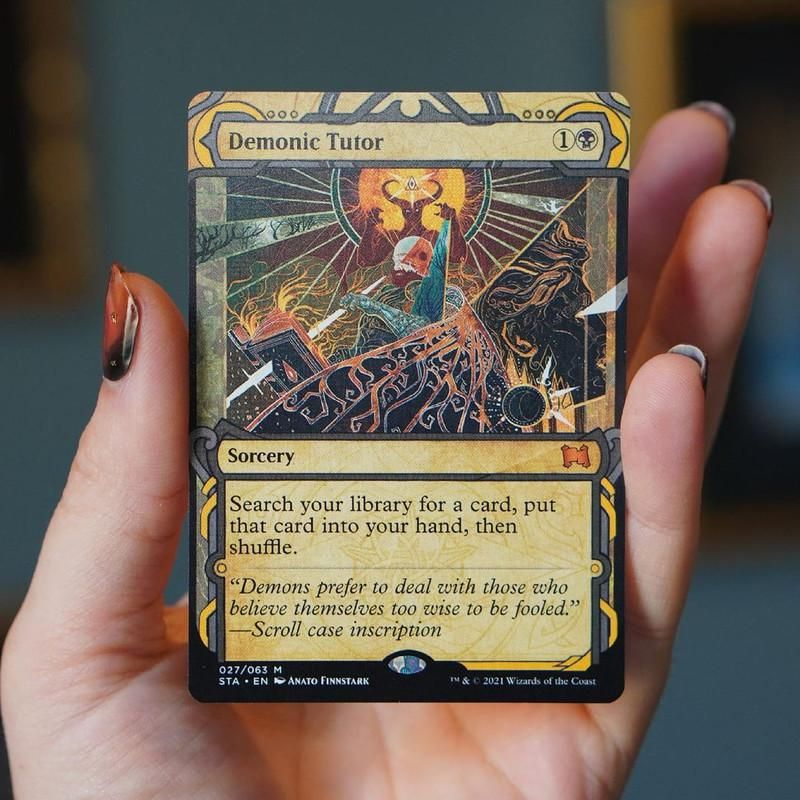 Magic: The Gathering has more than 20,000 participants — Photo: Wizards_magicizards_magic

Since then, exchanges have become professionalized around marketplace like MTGStocks, Cardmarket or TCGPlayer. No authority regulates the translations, leaving it to the law of supply and demand fuelled by nostalgia.

“Like me, the first players are now in their 40s and earn enough to afford the cards they dreamed of as teenagers,” says our investor, who pours a good part of his savings into these risky transactions.

The eBay platform, where much of the trading card business is done, has seen a 142% growth in transactions in 2020 with 4 million more cards sold. Pokémon topped the list with a record 574% increase in trading in one year, followed by basketball and baseball sports cards. Magic: The Gathering is in fourth place.

“New collectors are entering the card space as another investment avenue to diversify their investment portfolio. We expect this trajectory to follow suit in 2021,” says Nicole Colombo, general manager of collectibles and trading cards at eBay.

Sami Chlagou, the entrepreneur from Marseille, has made all of this a cornerstone of his business. His company, Cartapapa, negotiates Magic over the counter and recorded transactions worth about 12 million euros last year, usually during international competitions that attract thousands of players each time.

Most read: How can I display my NFT artworks in 2021? – PC World Australia

“They mostly speak English, but also Phyrexian, the imaginary language spoken by one of the people in the series,” says one fan, laughing, at a trading stand. “It keeps the legend alive and it’s addictive.”

With the blockchain, this industry could witness another new speculative momentum. The technology now makes it possible to attribute an unfalsifiable serial number, called a non-fungible token (NFT), to a digital object. Even virtually, a work can thus be authenticated as unique, like a certificate guaranteeing the signature of a great master, with the value exploding.

In March, several art proposals tagged this way found buyers among wealthy amateurs. The first tweet posted by the creator of the social network, Jack Dorsey, sold for $2.5 million. The digital artwork Everydays: The First 5,000 Days signed by the Belgian crypto-artist Beeple (Mike Winkelmann) was sold by the Christies auction house for more than $69 million.

“We are witnessing the beginning of a new chapter in the history of digital art,” the auctioneer explained in a statement released the day after the sale. “Artists have been using data storage and software to create works and distribute them on the Internet for over 20 years, but until now there was no real way to own and collect them. With the NFT, that has all changed.”

Trading cards are expected to be part of this phenomenon too. French startup Sorare is one of the first to enter this segment by allowing soccer fans to buy and sell NFT digital cards of their favourite players, and compete in a global championship.

Launched in March 2019, the game now claims more than 50,000 users and reached a 70-fold increase in the volume of cards traded in one year. At the end of February, it raised 40 million euros (from the American fund Benchmark in particular) to develop its global community.

The maps in Cross The Ages will also be digital and will have an NFT serial number, making each one unique. The universe in which the players will evolve — an imaginary continent where two civilisations of wizard lords and humanoid robots are pitted against each other — already involves more than 200 writers, scriptwriters and other blockchain experts.

The investment amounts to nearly 1 million euros and, by backing his game with a new cryptocurrency (Edra), the Marseille-based entrepreneur hopes to raise 12 million euros to finance its development.

The first book in the saga will be released in September and will be followed by seven others, published on a fixed date each year, with a code to obtain a free card drawn at random from the 360 that will be published each season.

“All of them are numbered works of art, made by artists who have worked on the biggest hits of recent years such as Avatar, Star Wars and Game of Thrones,” Sami Chlagou explains.

On Instagram, where the entrepreneur is gradually lifting the veil on the game, 60,00 curious souls have already spread the word.

Most read: What Is Ethereum And How Does It Work? – Forbes Advisor