Want to know the best Beast Axie Card Combo? We got you covered!

The Beast class in Axie Infinity is often the mid-liner of a team. They typically have the highest Morale, which means they have greater odds of getting critical hits and Last Stand turns. Let’s go through some of the best combos for Beast Axies carrying common build traits! 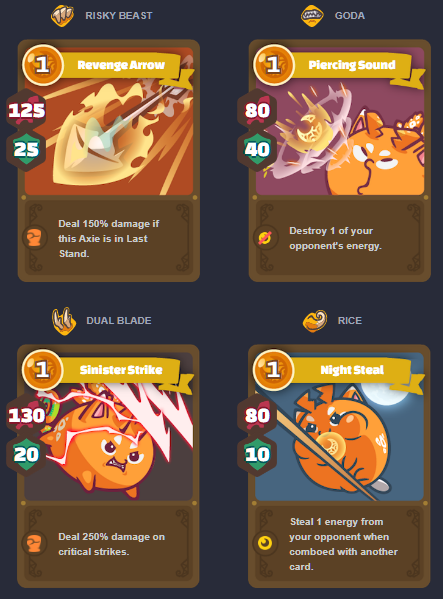 This build is a real damage dealer because of the Revenge Arrow and Sinister Strike. This build can offer you support if played strategically because of its steal ability (Night Steal). If you try to attack this Axie, make sure to kill it because it can deal 250% damage and more, if it is on Last Stand.

Revenge Arrow is best to use when your Axie is in Last Stand. Sinister Strike is a guaranteed damage dealer. Two Sinister Strikes can sometimes perish the target enemy. End it with Night Steal for a powerful combo.

We consider it the most powerful build. Single Combat guarantees critical strikes when comboed with another two cards. Comboed Nut Cracker cards are also guaranteed to be heavy damage dealers. 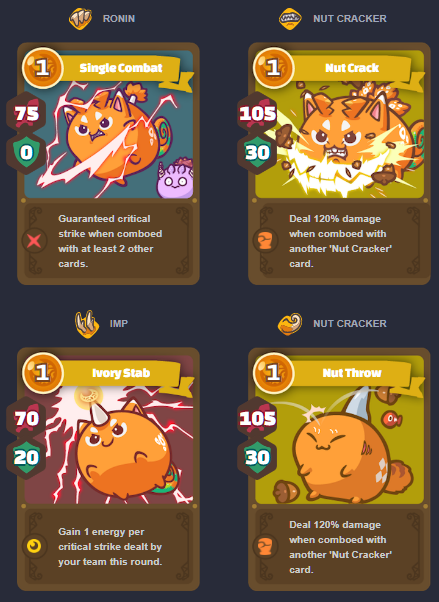 This combo can demolish a Plant Axie in round 1 if they are unshielded.

This combo will guarantee you four additional energies while smashing the target Axie with critical hits.

Another build set to destroy your enemies! This build contains the Death Mark, which applies Lethal to target if your Beast’s HP is below 30%. Lethal makes the following hits/attacks on the affected Axie critical. Follow it with Sinister Strike and Nitro Leap to ensure the enemy’s defeat. If you have extra energy, Night Steal can be your additional support!

This Build is a real damage dealer as it has high attack and critical cards. Piercing Sound can contribute to your shield. Remember, shields can help you enter Last Stand or retain some HP to execute your critical blows.

You have two best combos for different situations:

A. When your Axie is in Last Stand

Consider this combo if you have at least 4-5 red bars, and it is not too late for you to make your turn. It is safest to use two Revenge Arrow first as the cards will deal extra damage if the Axie using it is in Last Stand. Follow it with Sinister Strike to guarantee 250% damage on critical strikes. If your red bars and energy are enough, draw one Hare Dagger card for the last blow. If the Hare Dagger card is unavailable, replace it with a Piercing Sound card.

B. When your Axie is not in Last Stand

Place two Sinister Strike cards in front because they have the heaviest damage attack. Follow it with a Revenge Arrow and a Hare Dagger to guarantee the death of your target Axie. If the Hare Dagger card is unavailable, replace it with a Piercing Sound card.

If you want more combo tips, tutorials, play-to-earn latest news, and leaks, make sure to always check in at nftgamef.com and follow us on social media. Happy grinding!

Most read: How to Create NFTs and Upload to OpenSea Moralis The Ultimate Web3 Development Platform