Learn about the current state of the Arena PVP Meta in Axie Infinity, Meta Team Comps, Strongest PVP Axies, Best Cards to have, & how to counter them. 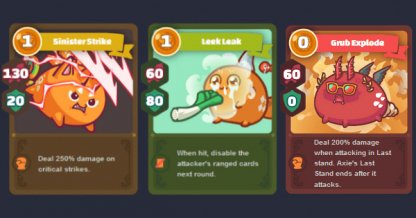 What Is The Current Meta In Axie Infinity?

Like any other game, Axie has what you call a “meta”. Meta means the most effective tactics available to excel in a game. The current meta in Axie right now is having 1 Plant and 2 Damage Dealers in a team composition.

If you’re a beginner, it’s best to start out with the meta and eventually try out other builds that you may eventually be better playing at. We don’t necessarily have to follow the meta to be good at Axie. We can build our own team to our liking. At the end of the day, it all comes down to our own playstyle.

Check The Meta Out For Yourself

The information we’ve noted here is based almost entirely on statistics provided by Axie Infinity Marketplace & by analyzing the Axie teams of the highest ranking players in the leaderboards.

However, we think it’s really important that you play the game and see the meta for yourself, as that will give you the best understanding of what is currently happening.

Recommended For Beginners And Novice Players

In Axie, the standard and most balanced team comps are:

If you want to really take your game into the next level and rise into one of the top players in the leaderboards, check out are top 5 strongest team comps for Arena here:

This team is quite annoying for the enemy party. This comp is quite famous for continuously poisoning your opponent and can deal lots of damage provided by barb strike.

Axies paired with Bug Signal and Cute Bunny can deal a lot of damage while having a decent defense. If you combine it with discard cards and energy steal, it will take out your opponent easily.

This setup is also made for the enemy to miss some attacks and can deal lots of damage on reptiles, plants, and dusks.

Maybe you are interested: NFT Events You Should Check Out for 2021

This is one of the strongest build in the current meta. It allows the aquatic Axie to burst down the enemy backline and applies poison. This will allow you to play extremely defensive and let the poison soften up the enemy before finishing them off with your reptile.

This is currently one of the most favorite team comps in Axie. This lineup can easily outplay and manipulate the enemy team.

Having 2 Aquas with heals can tank lots of damage while your Bird deals huge damage to your opponent.

When thinking of building up a strong team for Arena in Axie, we must also consider the individual Axies that form the team composition. Some Axies are built only for casual play and Adventure Mode, while others are destined for showcasing its abilities and dominating in PVP.

Here are some of the Strongest Axies suited for Arena Mode:

A Beast Axie with Aquatic/Bird eyes and ears will allow you to out speed Reptiles and Dusk. This Axie gives you decent damage as well as energy control making it difficult for your opponent to set up his strategy.

This type of build absolutely destroys Plant Tanks because Beast cards will add in extra damage against Plant, Dusk, and Reptile type Axies.

This build mainly focuses bursting down the enemy backline using shrimp and garish worm to apply poison stacks. When using this build, it should be paired with an Axie that can deal with the enemy tank and a tank axie that can help you survive the first few rounds before to complete your combo pieces.

This Axie also has the blueprints for the Terminator Build. This Axie has a strong ability set up with 2 stun abilities in its kit which makes it difficult for your opponents to land hits. Doing this build on a Dusk type Axie will give it more survivability and increased speed (46 Speed Max).

Mystic Rush makes it so your enemy is slower than you and allows you to out-speed them in 1v1 situations. This Dusk can deal an incredibly high amount of damage and their only weakness is Gravel Ant.

What’s strong about Discard Bug is it stuns + discards enemy abilities continuously rendering them unable to make a move. Also, with third glance + sunder claw combined, you can automatically discard 2 enemy cards per round. 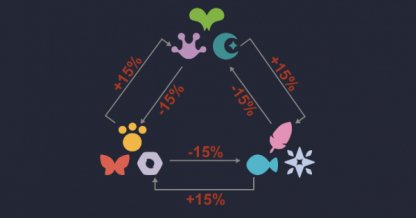 Best Teams for Arena Guide in Axie Infinity. Learn about the best teams for PVP, how to win more in Arena, managing your cards, and energy count.▶︎ Best Teams For Arena (PVP)

Best Cards To Have For Arena

Maybe you are interested: Where To Buy NFTs: The Top 11 NFT Marketplaces

Having the Strongest Cards in your disposal will surely benefit you from winning in Arena Mode. Based on energy cost, additional effects, & PVP usage, These are some of the best cards to have for PVP:

Even with the recent nerf, Terror Chomp is still one of the best meta cards in the game because of the fear debuff that lasts for 2 turns.

Since Bug class Axies are getting popular these days, Sugar Rush became a viable horn part for your damage dealer Axie to destroy tanky Axies (Plant, Reptile, and Dusk).

Anesthetic Bait now provides more shield because of the season 19 card update. It is one of the best defensive cards in the game and it can apply an additional stun if struck by an Aquatic or Bird class Axie.

This card’s overall damage output has slightly increased because of the buff. Since you will use this part on a pant Axie, you will be using the card’s additional 120% most of the time because of its low speed stats.

All-out Shot is still a viable card even if it was nerfed because of its high damage and 0 cost. Keep in mind that you will lose 30% of your health whenever this card lands.

An excellent Speed+ card that can change the outcome of 1v1s. Extremely useful especially when fighting against aquatic Axies to guarantee that you will get the first turn.

How To Counter Meta In PVP

There is no straight answer on how to counter each card in Axie Infinity. In order for us to counter our enemies instead, we have to learn how to count energy and read our opponent’s cards. In that way, we can anticipate their moves and potential combo set ups.

We also need to have basic knowledge on the different buffs and debuffs the game has.

Each Axie has its own weakness

We must not also forget that each Axie has its own strength and weaknesses. Here is the chart for Axie type strengths and weaknesses:

Familiarize Yourself With The Best Arena Team Builds

In order to effectively counter enemy Axies in the meta, you’ll need to know what builds they could potentially be running. This means you can win matches with just your knowledge of possible cards, team comps, etc. Make sure you look at all build variations of popular Axies before playing Arena!

Check Out The Best Team Builds For Arena Here!