Ethereum vs Solana vs Cardano — who is DeFi&039s favourite? 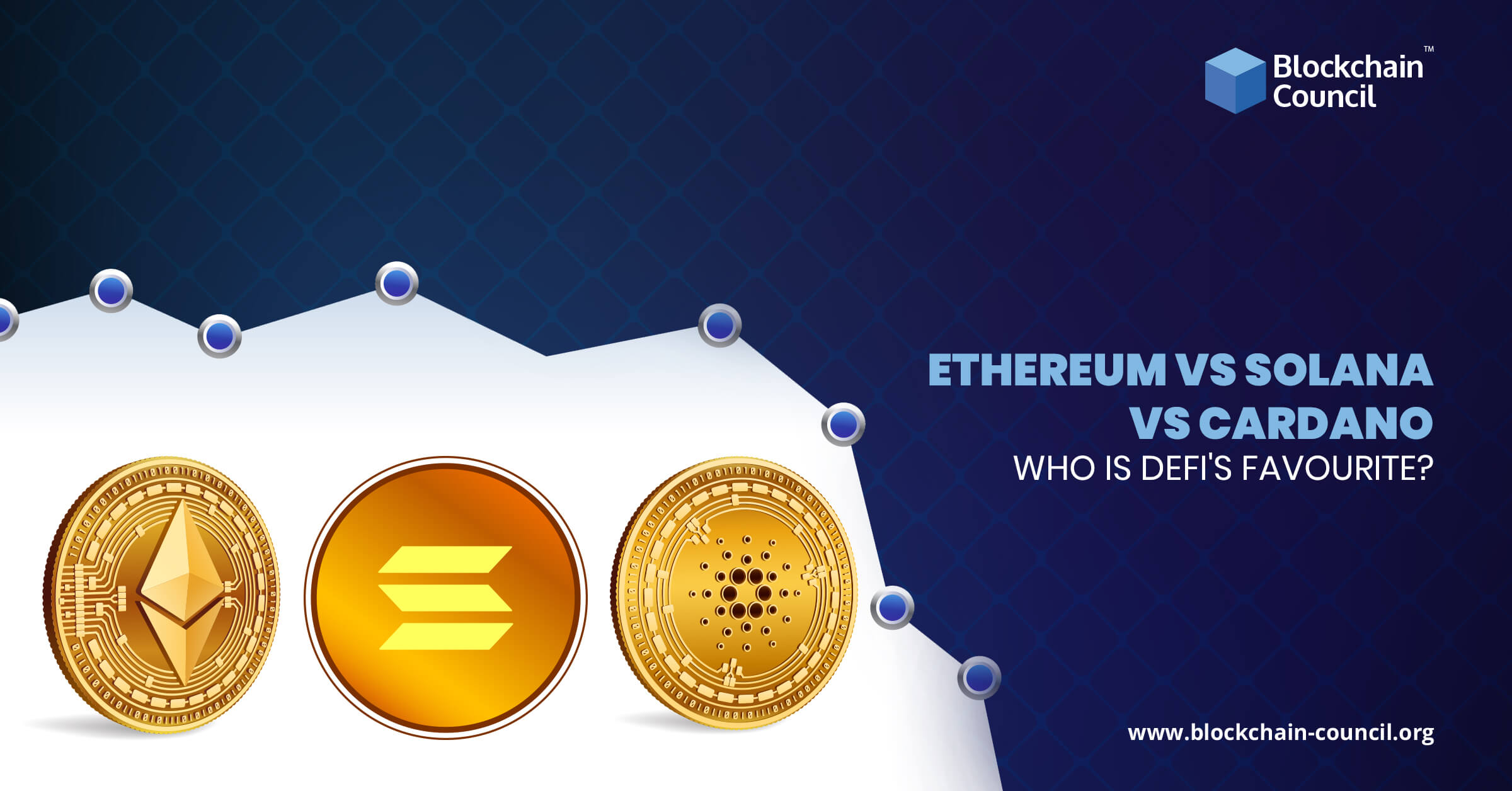 The general consensus regarding the future of cryptocurrencies is that it lies in the expansion of decentralized applications or DApps as we call them. Even though the hype surrounding the cryptocurrencies are based on their volatility and market capitalizations, it is true that ultimately crypto is a newly emerging software and like any other piece of software, the real worth of cryptocurrencies are also determined by their utilitarian standards.

At the very core of these cryptocurrencies, including the three aforementioned ones, lies the individual algorithm which drives them. Actually Ethereum, Cardano and Solana are the names of the Blockchain platforms upon which their cryptocurrencies operate. The Ethereum blockchain uses a crypto token named ETH while the Cardano and Solana chains utilize their respectives tokens by the name of ADA and SOL.

Smart Contracts are one of the most talked-about things in the blockchain and crypto community. So what are they? Well smart contracts are that which separates Bitcoin from the rest of the altcoins such as Ethereum, Solana, Cardano or even the Binance coin. Their algorithms contain tiny little pieces of codes which automatically execute themselves when certain conditions are met. To put it simply, these are ‘if, when, then’ statements that are automatically executed at the right time. The parties who are involved in the conducting transactions can put as many of these statements in the form of conditions as they want.

Ethereum: how it started?

Even though Bitcoin will always be remembered for introducing the blockchain technology and the concept of cryptocurrency in the world, it can be said that Ethereum has transcended Bitcoin by revolutionising finance in the world. It was created by a 27 year old Russian programmer named Vitalik Buterin, who named it after Ether, a scientific term from the 19th century.

Maybe you are interested: Crypto Price Prediction: Ethereum Could Outpace Bitcoin And Surge To Over 50,000

As soon as smart contracts were made available on Ethereum, it became a revelation in the world of crypto. As Bitcoin was considered to be an alternative to currencies, Ethereum became an alternative to that and everything beyond. Ethereum empowered the developers to utilize the technology of blockchain and build things that would revolutionize the future.

How does Cardano challenge the position of Ethereum in the crypto space?

Ethereum grew exponentially ever since it was launched in 2013, but however, there was a major shortcoming despite all the good things it had to offer, and it was due to the fact that Ethereum was running on Proof of Work system.

Large organisations called miners authenticate crypto transactions through a series of computers. The miners can only provide enough power required to authenticate or validate the transactions. They do not have the capacity to change or modify the blockchain or the transactions carried out on it. By performing this work, the miners are rewarded with new crypto. This is what is generally meant by a proof of work system.

The problem with this system is that, in the case of Ethereum and even Bitcoin, every miner who is involved in a transaction is rewarded and hence, in order to reward every time a transaction is carried out, a huge amount of computing power is required. Here, Cardano makes use of a system called the Proof of Stake (POS), which is a lot more efficient.

In the POS system, the miner is required to strake their own crypto to be eligible to receive rewards in the first place. The platform then automatically points out the top miners, which is always a predefined number of miners and allows them to validate the transactions. As a result the overall computing power and thereby the total amount of electricity required to power those computers comes down at a considerably faster rate. This is one of the most important reasons why it is environmentally much more sound than that of Ethereum or Bitcoin, and in reality the same goes for Solana as well.

Solana and Cardano: the Ethereum killers

The main reason why Cardano and Solana are called Ethereum killers is because of the proof of stake system used by both of them. As of this moment, they are a lot more efficient than Ethereum or Bitcoin and they also provide the answer to the most compelling question from the experts, billionaires and world governments regarding crypto and that is concerned with the environmental footprint of these digital assets.

Maybe you are interested: GitHub – ethereum/mist: [DEPRECATED] Mist. Browse and use Ðapps on the Ethereum network

However, next year Ethereum is planning to upgrade to the Proof of Stake system as well and launch the version 2.0 which is believed to reduce their energy requirements by around 99 percent.

Conclusion: Which one is expected to lead the race?

There are two major points that need to be mentioned at this point. Firstly, Ethereum, Cardano and Solana all are either upgrading or are already providing Proof of Stake system while offering smart contracts. The problem, with Ethereum, is however with scalability.

Every time a transaction is carried out on the Ethereum platform, one has to pay a gas fee or a transaction fee, irrespective of what the nature of that transaction might be. As of this moment, the gas fees can even go up to $150 and owing to the volume of transactions taking place on this platform, the gas charges are volatile.

In comparison, the transaction charges required for Solana and Cardano platforms are quite less, as they cost a dollar or even less at the moment. The Solana platform has addressed this issue of scalability by introducing a cryptographic time-stamping system which can accommodate an astonishing 65000 transactions per second.

Undertaking courses on cryptocurrency trading, attending a cryptocurrency course or even gaining a Blockchain certification provides the necessary and fundamental knowledge for the assessment of the crypto and blockchain ecosystem.

If you want to keep up with the trends of blockchain industry, join our communities on Discord, Reddit and Telegram.