Transactions are cryptographically signed instructions from accounts. An account will initiate a transaction to update the state of the Ethereum network. The simplest transaction is transferring ETH from one account to another.

To help you better understand this page, we recommend you first read Accounts and our introduction to Ethereum.

An Ethereum transaction refers to an action initiated by an externally-owned account, in other words an account managed by a human, not a contract. For example, if Bob sends Alice 1 ETH, Bob’s account must be debited and Alice’s must be credited. This state-changing action takes place within a transaction. 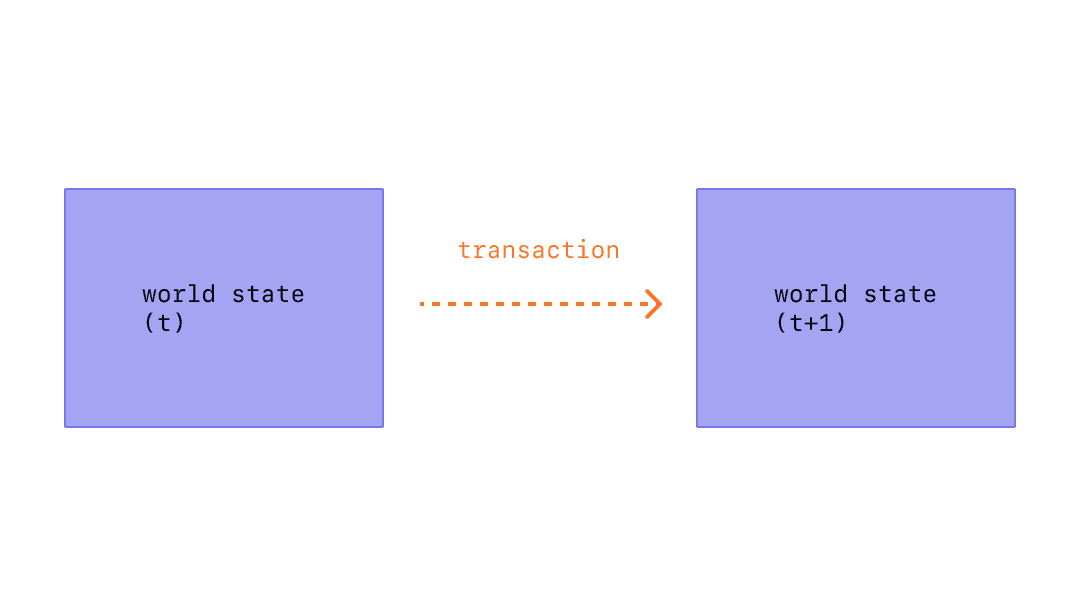 Transactions, which change the state of the EVM, need to be broadcast to the whole network. Any node can broadcast a request for a transaction to be executed on the EVM; after this happens, a miner will execute the transaction and propagate the resulting state change to the rest of the network.

Transactions require a fee and must be mined to become valid. To make this overview simpler we’ll cover gas fees and mining elsewhere.

Gas is a reference to the computation required to process the transaction by a miner. Users have to pay a fee for this computation. The gasLimit, and maxPriorityFeePerGas determine the maximum transaction fee paid to the miner. More on Gas.

The transaction object will look a little like this:

But a transaction object needs to be signed using the sender’s private key. This proves that the transaction could only have come from the sender and was not sent fraudulently.

An Ethereum client like Geth will handle this signing process.

With the signature hash, the transaction can be cryptographically proven that it came from the sender and submitted to the network.

The vast majority of transactions access a contract from an externally-owned account. Most contracts are written in Solidity and interpret their data field in accordance with the application binary interface (ABI).

The first four bytes specify which function to call, using the hash of the function’s name and arguments. You can sometimes identify the function from the selector using this database.

The rest of the calldata is the arguments, encoded as specified in the ABI specs.

For example, lets look at this transaction. Use Click to see More to see the calldata.

The function selector is 0xa9059cbb. There are several known functions with this signature. In this case the contract source code has been uploaded to Etherscan, so we know the function is transfer(address,uint256).

The rest of the data is:

On Ethereum there are a few different types of transactions:

So for Bob to send Alice 1 ETH at a baseFeePerGas of 190 gwei and maxPriorityFeePerGas of 10 gwei, Bob will need to pay the following fee:

Gas is required for any smart contract interaction too.

Any gas not used in a transaction is refunded to the user account.

Once the transaction has been submitted the following happens:

Watch Austin walk you through transactions, gas, and mining.

Ethereum originally had one format for transactions. Each transaction contained a nonce, gas price, gas limit, to address, value, data, v, r, and s. These fields are RLP-encoded, to look something like this:

Ethereum has evolved to support multiple types of transactions to allow for new features such as access lists and EIP-1559 to be implemented without affecting legacy transaction formats.

EIP-2718 is a new generalised envelope for typed transactions. In the new standard, transactions are interpreted as:

Where the fields are defined as:

Know of a community resource that helped you? Edit this page and add it!