While Bitcoin relies only on currencies, Ethereum goes a step further by providing a virtual machine and smart contracts that enable users to deploy their tokens, which is similar to Bitcoin.

A token can represent a virtual currency, an ounce of gold, a lottery ticket, etc. You can develop all kinds of tokens on the Ethereum blockchain, but for this tutorial, we’ll focus on how to create and deploy an ERC-20 token.

We’ll cover the following in detail with practical examples:

You might be wondering, “Why should I create my own token?” Blockchain, Ethereum, and tokens are becoming a huge part of the software development landscape. By learning how to create a token on the Ethereum blockchain, you’ll discover how blockchain technology works under the hood and stay ahead of the curve.

To follow along with this tutorial, you should have at least a fundamental understanding of blockchain technology, Solidity, and how Ethereum works. If you need a refresher, not to worry; we’ll review the basics before we start building our token.

What is blockchain and how does it work?

In simple terms, a blockchain is a record of transactions in a ledger or database that is distributed across many participants in a network. This ledger contains records of transactions made in the network.

Nodes in the network listen to new transactions broadcast or emitted in the network, then perform the work of adding the transaction to their ledgers. We can see that each node in the network possesses or has a copy of the ledger. This is responsible for the blockchain’s distributed nature.

The word “blockchain” comes from the fact that the transactions or records are linked in a chain inside the ledger. A transaction, as we already know, is an exchange of currency between two parties in the node. It can be represented in JSON like this:

This is a simple record or transaction. It tells us that bob transferred 30BLC to Alice.

A block is like an array that contains objects of transactions. So this block can contain many transactions:

You can see where the block comes in. The chain means that these blocks are linked to each other. Each blockchain initially starts with a genesis block that the creator adds and is broadcast to the network.

Each block also has a cryptographic hash, which serves as a unique identifier in the network; no two blocks can have the same hash.

When a block is verified by the nodes and set to be added to the network, this block has a pointer that points to the hash of the last block in the network.

This way, any new block being consolidated to the network points to the immediate latest block. This is how the “chain” in the blockchain is formed.

Ethereum is a blockchain with a digital currency called Ether (ETH). Just like a generic blockchain, transactions are stored in a ledger.

What sets Ethereum apart from other blockchains is its flexibility. Whereas many blockchain platforms only support transferring currencies, Ethereum enables you to transfer any data through the blockchain and pay the price with Ether.

How does Ethereum work?

As mentioned above, in the Ethereum blockchain, we can transfer any data and pay the price with Ether.

Just like we transacted with BLC currency in the above example, the Ethereum blockchain facilitates ETH transactions. Let’s say Alice transfers 1 ETH to Bob. This transaction is verified by the nodes in the network and the transactions are added to the blocks in the blockchain.

There is an activity called mining, which entails working for an Ether. This work involves solving a hard computation by trial and error. This can be done by any node in the network. A node that successfully solves the computation is awarded a certain amount of ETH. The difficulty of the work increases as more transactions are mined.

What are smart contracts?

Ethereum has a thing called smart contracts. Smart contracts contain code that is executed in the Ethereum blockchain.

A smart contract is a type of account in Ethereum. This means it is not controlled by a user and they can send transactions in the blockchain. Being an account, smart contracts have balances and they contain an EVM code.

Ethereum Virtual Machine (EVM) is a virtual machine in which the compiled Solidity ABI code is run. These smart contracts in Ethereum have become a world standard in creating several tokens. These standards came to be known as Ethereum Request for Comment (ERC) standards.

Ethereum has many standards, but the most popular and widely used are ERC-20 and ERC-721. ERC-20 is used for creating tokens while ERC-721 is used to develop non-fungible tokens (NFTs).

ERC-20, a standard proposed by Fabian Vogelsteller, is a smart contract that contains a set of APIs. ERC20 defines a set of rules that apply to all token that choose the ERC-20 standard.

As mentioned above, ERC-20 can be used to create virtual currencies like Bitcoin and Ether. Among the most well-known tokens build using the ERC-20 standard are Binance Coin BNB and Shiba Shabu.

ERC-20 tokens can be sent and received. They are fungible tokens, meaning their value is the same everywhere in the blockchain.

Maybe you are interested: The World’s 2nd Largest Crypto-Currency, Ethereum, Had an Even Bigger Price Surge Than Bitcoin

According to nftgamef.com support, wallets and exchanges use the standard to integrate various ERC-20 tokens onto their platforms and facilitate exchanges between ERC-20 tokens and other cryptocurrencies.

Now that we understand what the ERC-20 standard is, let’s look at the body of an ERC-20 token.

In practice, an ERC-20 would look something like this in Solidity:

The following methods can be available in an ERC-20 token:

Events can also be registered on our token to capture certain events when they are emitted.

ERC-20 tokens have the following events:

With the background info out of the way, let’s write a simple token. We’ll call it ND Coin 😀

In the first line of the code, we set the license identifier and the version of Solidity the code was written for. Here, our Solidity code is for Solidity v0.7.0-0.9.0. We declared our contract by using the contract keyword and then giving it the name NDCOoinERC20.

Set the events of the token

We will declare the events Transfer and Approval inside our contract:

Set the name, symbol, and decimal of the token

Next, we set the name of our token, its symbol, and the decimal to use:

Our token name is ND Coin and our symbol is NDN. We set the decimals to be 18.

Set the balances and allowances map

Next, we will declare two mappings:

A mapping in Solidity is similar to a key-value pair. So in the balances, an address is the key while the uint256 (unsigned integer of 256 bits) is the value.

According to the Solidity docs, an address type is a 160-bit value that does not allow any arithmetic operations. It is suitable for storing addresses of contracts, or a hash of the public half of a key pair belonging to external accounts.

The balances maps an address to a uint256 int:

An address refers to its balance. The allowed mapping is also a key-value pair that maps addresses to another mapping. This last mapping maps addresses to their unit256 values. It allows you to store the number of tokens that can be transferred to a recipient.

The next line of code is as follows:

This stores the number of tokens that are available in our contract.

Set the amount of the total supply and the balances

Here, the constructor is called with the total number of tokens we want to be in our contract (total). The total is set to totalSupply_, and the balance of the deploying address is set to the total tokens. The nftgamef.comer contains the Ethereum account of the currently executing contract function.

Get the balance of an owner

In the next line, we will have the balanceOf method:

The method is transfer:

This method has the following arguments:

In the body of the method, we see that a check is made to verify that the number of tokens to be sent to the recipient is enough according to the deployer’s address balance.

Next, the numTokens is subtracted from the deployer’s balance and credited to the receiver‘s balance. Then, a Transfer event is emitted. Finally, the Boolean true is returned.

The next method is approve:

This method has arguments called delegate and numTokens.

In the method body, we reference the delegate map in the allowed mapping to set the number of tokens to it. Then, we emit the Approval event and return true.

The method is allowance:

This method has the following arguments: owner and delegate. owner is the address to return the number of tokens transferable to the recipient in the delegate.

The method to transfer tokens from one account to another is transferFrom:

Most read: What is Ethereum&039s Uncle Rate and Why Does It Matter? – ETH Gas Station

Deploying a token on the Ethereum testnet

We’ll deploy our token to the Ropsten test network and compile our smart contract on Remix, We’ll also use MetaMask to create a wallet on the Ethereum test network.

Install the MetaMask extension on your desktop browser. Create an account and leave it for now; we’ll come back to it later.

Next, go to Remix and create a new .sol file. We’ll name it nftgamef.com and paste our smart contract in the above section there: 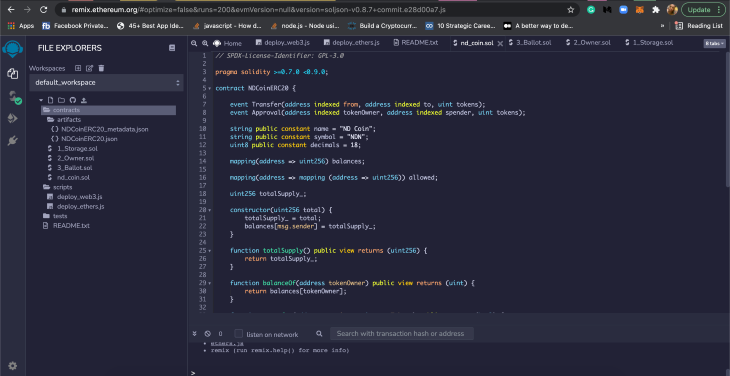 Now let’s get some free ETH!

If we open our MetaMask extension, we’ll see that we have 0 ETH. But we can get free ETH from Ropsten Test network. We will have to copy our account address from MetaMask, then paste it on the nftgamef.com page and click on the Send me test Ether.

Our request will be queued, and after approximately three minutes, we’ll see 0.3 ETH in our MetaMask ETH account. 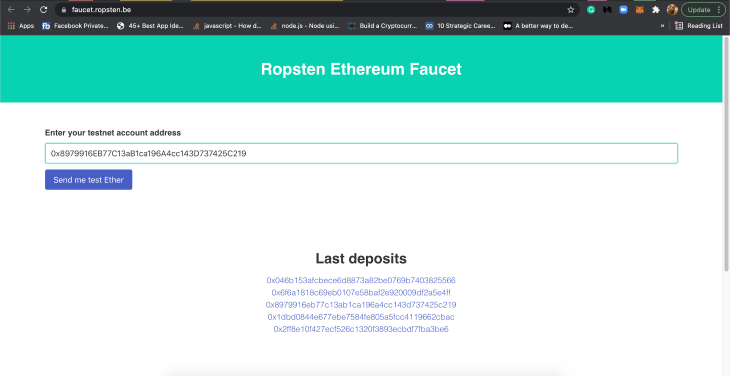 Now, we can deploy our smart contract to the Ropsten test network.

Go back to the Remix dashboard and click on the Ethereum logo in the dashboard. This will load a page where we can deploy and run transactions.

Let’s change it so our deploying network will be our Ropsten network. Click on the dropdown and select Injected Web3. We should see (0.3 ether) in the ACCOUNT section right beside our deploying address. Now we’re ready to deploy our smart contract. 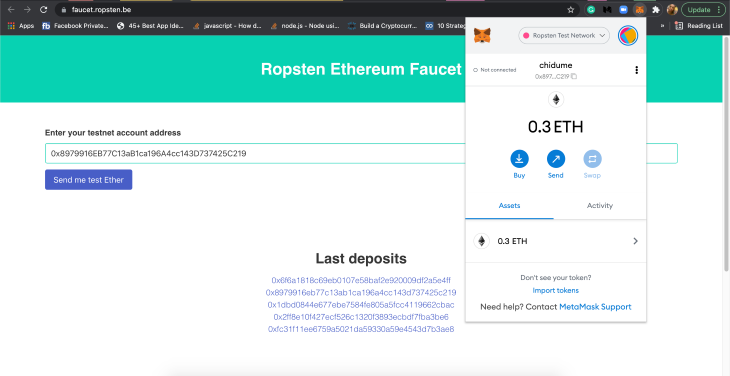 This will open our MetaMask extension and ask us to confirm the pending transaction. Click the Confirm button on the MetaMask popup.

This will deploy our smart contract on the Ropsten test network. 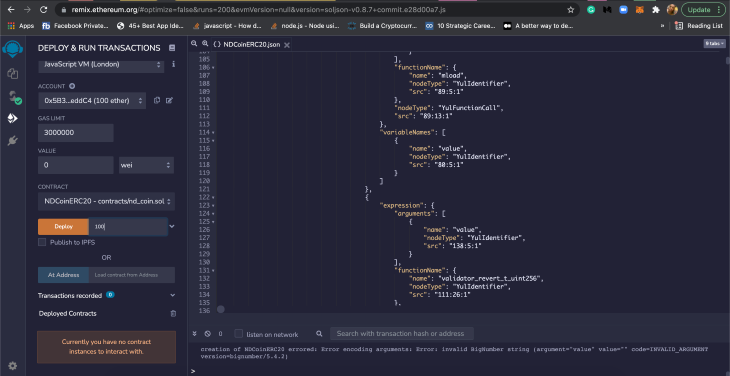 Now, on our Remix page, if we scroll down on the left sidebar, we will see the names of methods in our smart contract and an input beside them.

This is where we can run the methods in our smart contract and get the results.

As you can see below, we checked the balance of our deploying address and it returned 100:

We have successfully created and deployed an ERC-20 token on an Ethereum network.

This tutorial took us on a fun ride. We started by introducing blockchain and Ethereum, then delved into ERC-20, exposing in detail what it is and how it came into being.

Later, we analyzed the ERC-20 body and discussed the methods and events found in an ERC-20 token and what they do.

Finally, we created a simple token in Solidity and deployed it to the Ropsten test network.

There is so much more to explore, but this tutorial should give you a head start as you foray into the world of ERC tokens.

Most read: How to mine Ethereum Classic | f2pool