Lot of people when they talk about crypto mining they discuss things like: ASIC mining profitability, Bitcoin mining machines, FPGA mining, building a profitable Ethereum GPU mining rig, mining BTC with Nicehash, GPU mining altcoins etc. All of that relates to GPUs and ASICs. But what about CPU mining? Is CPU mining still relevant in 2021 or is it a thing of a past?

CPU mining profitability in 2021, what its like? Are there coins that you can really CPU mine Today and is it really worth it to build a CPU mining rig? Here, this post is all about CPU mining.

Did you know that in early days Bitcoin was only CPU mined? One could mine Bitcoin using their Intel Pentium CPU and generate over 100s of BTC back in 2010. But that’s not possible anymore. Not just with Bitcoin but for almost every altcoins.

Most of the popular coins that were initially mined using CPUs are no longer CPU mineable. There are two main reasons for this. 1. Rise in network difficulty and 2. Rise of complex ASIC (Application Specific Integrated Circuit) miners. Both these factors rendered CPU mining largely on a vast majority of coins

Anyways even Today there are certain cryptocurrencies that are still focused on CPU mining. One such popular coin is Monero (XMR, RandomX algorithm), the biggest and easiest coin to CPU mine. Monero mining is profitable on AMD Ryzen CPUs and certain Intel processors. But does it pay off and will you be able to make the ROI?

Sure, but this is not going to work for all CPUs. Particularly cheap lower end CPUs are not profitable anymore when it comes to mining. But at least Ryzen CPU would pay off but then at current network difficulty it will still take more than a year for you to earn the ROI.

In this article, we have listed down some of the cryptocurrencies that are possible to mine through CPU even today. If you don’t have an ASIC hardware or fast GPU then not a problem. You can still use your CPU power to mine these altcoins. They provide GPU / ASIC resistant and are only designed to allow CPU mining.

Now before we list the CPU only mined cryptocurrencies let’s look at what is CPU mining.

What is CPU mining?

As you know, mining is the act of allowing computer power to solve complex mathematical puzzles aka algorithms. By doing so miners verify / validate a block of transactions on the blockchain and for doing this process they mint new coins from a block as a reward. To know more learn about block rewards.

Usually to mine altcoins miners use ASIC machines and allocate their computers GPU power. But there are specific altcoins that are possible to mine with CPU.

CPU mining is a process that utilizes CPU (Central Processing Unit) cores to verify transactions on the blockchain and to create / mine new coins. CPU mining involves using everyday computers or setting up CPU mining rigs to make use of their power mainly as a mining devices.

One CPU, One Vote:

The idea behind CPU mining is “one processor, one vote” which is a consensus mechanism proposed by Satoshi Nakamoto in the Bitcoin whitepaper. But that principle got broken for Bitcoin. As of now only certain altcoins allow for CPU mining.

When it comes to CPU mineable coin the first crypto that comes to everyone’s mind in Monero. Monero is the only popular coin with the most CPU hashrate. It is currently the best CPU coin on the market and it is the most successful CPU coin around. In order to allow CPU mining Monero uses RandomX hashing algorithm which completely resists ASICs and holds very well against GPUs.

Other than Monero there are few more coins using the same Random X algorithm which also allows for CPU mining. Plus there are a lot of coins coming out with unique hashing algorithm which only supports CPU mining. During the initial stages the difficulty on such coins will be very low and you can even make a profit mining with your Laptop. But remember that mining such coins are extremely speculative as only very few coins will take off in price.

So in general CPU mining is not left out and is not outdated just yet. There are a lot of developers still support for CPU mining. Even in 2021 there are still active CPU mineable cryptocurrencies. You can use your home computers to participate in CPU mining. However just because you can mine using using CPU doesn’t mean its a good idea to mine them.

First of all let’s understand why Monero is successful. Monero is the only CPU coin that gets actively developed and it constantly works upon improving their PoW (Proof of Work) algorithm to stay ahead in the game.

In the past they’ve tweaked their PoW algorithm many times. The recent switch from CryptoNight to RandomX has completely stripped off ASICs from their network and additionally brought in more competition to GPU miners. This change allowed CPU miners to largely participate in the blockchain consensus. Since it provides active development and brings in more innovation it is the only CPU based coin that has been successful so far. However this is not the case with other CPU based coins and smaller blockchain networks.

Market price of a coin remains one of the main factor when it comes to mining. So what determines the price? Its the interest from people. Only if there is some kind of active development there will be some adoption. If there is no development the coin will simply fail in the long run.

The problem with mineable coins is that most projects will be largely abandoned by its developers. When it comes out initially it might seem like a good choice to mine them. Especially in the past during 2017 cycle many small-scale miners use to jump into those early coins to rack up on profits. But this strategy is not going to work anymore.

Most coins today are not available on major exchanges. Even if you find an exchange you’ll not be able to sell them due to low trading volume or market activity. Also since most CPU coins have low hashrate it gets easy for someone to 51% attack and is more susceptible to botnet attacks.

Before you start mining with your CPU use mining calculators to estimate the profitability. Check the coins popularity. Make sure it is listed on major exchanges. At least it should be listed on some exchange for you to sell your mined coins. Only then you should pursue them in mining.

So what are the best cryptocurrencies that you can mine with CPU?

In order to allow CPU mining developers should design a Proof of Work algorithm with CPU in mind. The algo should mainly allow CPU and keep ASIC miners at bay.

There use to be many such algorithms supporting CPU mining such as: CryptoNight, Dcrypt, Bcrypt, X11, Wild Keccak, Argon 2d etc. Among them CryptoNight is the most popular algo. For CPU mining one often looks at coin using CryptoNight. Even though CryptoNight is GPU mineable it largely favors CPU miners. Most of the CryptoNight coins are mineable by CPU and one could make a decent enough profit with the right CPU.

Popular CPU coins such as Monero (XMR), Bytecoin (BCN), AEON were all using CryptoNight algorithm until ASICs came in. Now all those CPU algos are no longer CPU mineable.

If you want coins that are solely mineable with CPU then you should look for the ones using CPU only algo. Since CryptoNight got affected by ASICs Monero switched to RandomX – A new hashing algorithm designed specifically for CPU mining. Anyways it also supports GPU mining.

Maybe you are interested: 12 Best Cryptocurrency To Mine [2022 Review And Comparison]

The problem with Monero mining is that it is hard to mine with CPU these days, especially with low power CPU. If you are looking to mine for fun then sure you can but don’t expect to make the ROI on your CPU. At current hashrate and network difficulty the best way to profit from Monero is by using GPUs to mine which is much stronger than CPU. But then if you got a GPU, there are much better coins like Ethereum, Ravencoin etc. in which you can profit more than Monero mining.

A CPU that was pulling like $2 to $3 a day once now barely earns $.10 cents a day. In current scenario only if you allocate more hashrate you’ll be able to run a profitable mining operation. For this a home PC or Laptop computer is not sufficient. You need several powerful processors. Only people those who have already built a CPU mining rig or runs a server are capable of CPU mining. 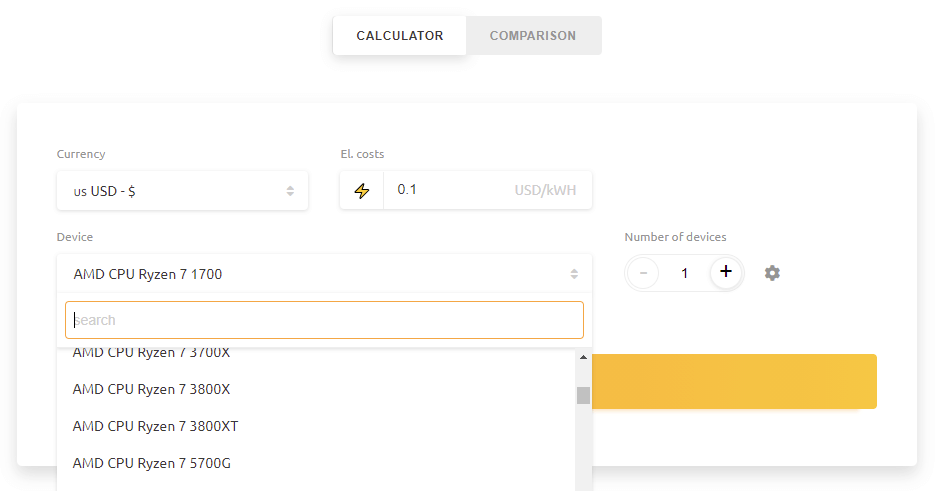 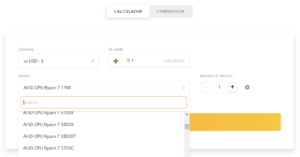 Anyways only mine if the calculator displays your CPU as profitable. In most cases and with current rising network difficulty and hashrate you’ll only earn cents. So don’t expect to make the ROI anytime soon.

If you got a Gaming computer then put your GPU to work and not CPU as it is not worth the time and effort. Anyways for those who are looking for CPU coins or CPU only algorithms here is the list.

There use to be many CPU mineable coins such as HODLcoin, ROIcoin, Magi (xmg), Zoin (ZOI), Lethean, Yadacoin, Biblepay, Koto, Ninja Coin etc. Most of these projects are dead. Currently following are the list of coins available for CPU mining.

This list will be updated regularly and whenever we come across new CPU coins we’ll list them here. Also abandoned / dead projects will be removed. Anyways please do your due diligence before you put your resource to mine these coins.

The profitability of CPU mining depends on several factors such as network hashrate, hardware cost, energy cost and so on. Make sure the coin you are mining at least makes your electricity cost back so that you can hold on to your coins for future profit. If you got free electricity then you can mine them without checking the profitability because you’re profiting anyway. But again ensure the coin is at least available on some exchange and has got enough liquidity so that you can get in and get out.

Now before you start mining these coins with your CPU here are few points to note.

Next check the potential of the coin. Do not rush into new coins thinking that the price will soar. Most of them are simply trash and they don’t even have enough trade volume.

Lastly don’t expect your returns to be as great as GPU mining profits. In fact in most cases mining with CPU is not even going to cover your electricity cost. If that is the case then do not mine. You are doing nothing but shortening the lifespan of the hardware.

To summarize, CPU mining is a simple way to earn few cents a day. But only if you got the right hardware and can find the right coin. If you come across such coins and if your CPU is profitable at mining then put your CPU to work. Else it is better to keep them sitting idle. All that money, energy and time spend on some random shitcoin is not worth it anymore.