Not aware of the terms permissioned and permissionless in Blockchain? To help you understand, here we bring a detailed introduction to Permissioned blockchains. Let’s dive into!

Decentralized Ledger Technology (DLT) has opened up a slew of opportunities for the companies that are looking to innovate. It is not new; Blockchain technology is one of those technologies that have radically changed how industries work. However, there cannot be one single solution for the whole industry.

See more: What is permissioned blockchain

Each startup, company, enterprise, or an industry is different when it comes to their needs and requirements. It is evident that a privately held company just cannot use a fully decentralized blockchain network. That’s where different types of DLTs come in.

What are the Permissioned Blockchains?

So, basically, there is one big difference between a permissioned and a premissionless one, i.e., the way the participants are going to interact with the network. A permissioned system is also known to have a restriction on the consensus participants, making permissioned networks highly configured and controlled by the owners. However, it is not a bad thing, but it is all about building a suitable blockchain network.

There are many popular permissioned blockchain frameworks out there. It includes Hyperledger, Quorum, Corda, and others.

Also Read: 6 Key Blockchain Features You Need to Know about!

Maybe you are interested: What are the Benefits of Staking Crypto?

The blockchain technology used in bitcoin was simple. It was a public peer-to-peer network capable of doing transactions without any centralized authority, and each node has its own copy of the ledger. However, it is not the only possible blockchain or distributed ledger technology. There are many types of DLTs. Let’s list them briefly to get a clear idea.

Also Read: What’s the Difference between Blockchain and Distributed Ledger?

Bitcoin and Ethereum are two great examples. Bitcoin is the first generation cryptocurrency that utilizes the most basic idea of blockchain. Ethereum brings more to the table by providing the developers with the ability to develop distributed apps(dApps) using smart contracts.

Public blockchains also utilize consensus algorithm that doesn’t support a permissioned approach. They are open source, and anyone without any prior permission can take part in the network.

Read More about Types of Blockchain.

Difference between Permissioned and Permissionless Blockchain

Read Now Blockchain vs Database and understand the difference between the two. 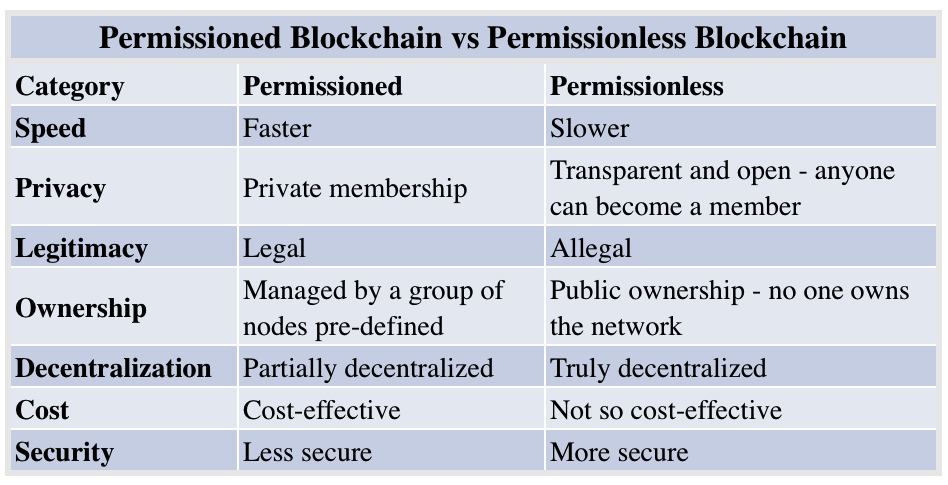 Permissioned blockchains are not free from challenges. In fact, implementing permissioned blockchain solutions can be a tough task. So, what makes it so challenging? There are many challenges that it has to go through. Few of them include data storage, messaging and integration, identity, smart contracts management, and so on.

As a business, many decisions need to be made before starting a permissioned network. For example,the company first needs to decide which blockchain platform to use. They also need to determine the blockchain runtime to use. After all, answers to these two questions will give them the development stack on which the development will take place.

Let’s have a look at the challenges that one might come across while developing permissioned solutions:

Also Read: How does Blockchain Work?

Permissioned Blockchains are here to stay. They provide blockchain benefits in a closed ecosystem while ensuring that it meets the need of an organization. There are apparent benefits of using it, including cost-effective, proper governance, and efficient performance. However, it also does come with its own drawbacks and challenges. So, what do you think about permissioned blockchains? Comment below and let us know, we are listening.

If you are a novice in the Blockchain industry, you first need to learn the basic concepts of blockchain technology. For beginners, we offer Free Blockchain Fundamentals Course. Enroll now and learn the fundamentals of Blockchain Technology to deepen your roots of knowledge and skills.

Most read: NEO for beginners: A step-by-step guide to NEO and GAS | Finder