Do you want to know about the disadvantages of blockchain technology? If yes, you have come to the right place. Let’s dive in!

If you are following the blockchain technology landscape, then you will see a trend of positive articles and information about blockchain. Almost every publication is selling the term to drive the blockchain adoption among enterprise users, learners, and developers.

However, that’s only the half side of blockchain technology. Just like any other technology, it does come with its own drawbacks, i.e., disadvantages.

The trends also speak for themselves. Companies are looking for blockchain talent as it demands soars.

In this article, we will explore those disadvantages and understand blockchain technology in a much better way.

If you are reading the article, you already know the advantages of blockchain. It is immutable, transparent, secure, and decentralized. The features are revolutionary for sure as they can be used for multiple use-cases and industries.

But, to make sure that we all are on the same page, let me start with a very basic definition of blockchain.

Blockchain is a distributed ledger technology which improves on the centralized-based solutions in different ways. It consists of peers connected in a distributed network where each peer has a copy of the ledger. To validate the transactions between those peers, the network utilizes a consensus algorithm.

Sounds complicated? Let’s try to simplify it below.

Let’s take three people. Each of these people is an individual with their own identity. While each individual is capable of working on its own, they need a centralized authority when doing transactions between them. For example, if one tries to send money to another, it will have to go through a centralized bank or payment gateway.

Now, in the case of a decentralized network, if John tries to send money to Alice, they can do it by themselves without relying on a centralized entity. Here, each of the individual people acts as their own bank. They do not have to rely on a centralized entity to complete the transaction and that itself opens up a wide range of use-cases.

If you want to learn more, then you should check out our detailed beginner’s guide on blockchain: Blockchain For Beginners: Getting Started Guide

Let’s learn about the disadvantages of blockchain technology.

What are the Disadvantages of Blockchain Technology?

Blockchain technology is going to change the world around us. However, to understand what it has to offer, we need to understand its disadvantages as well. In this section, we will go through all the points below. 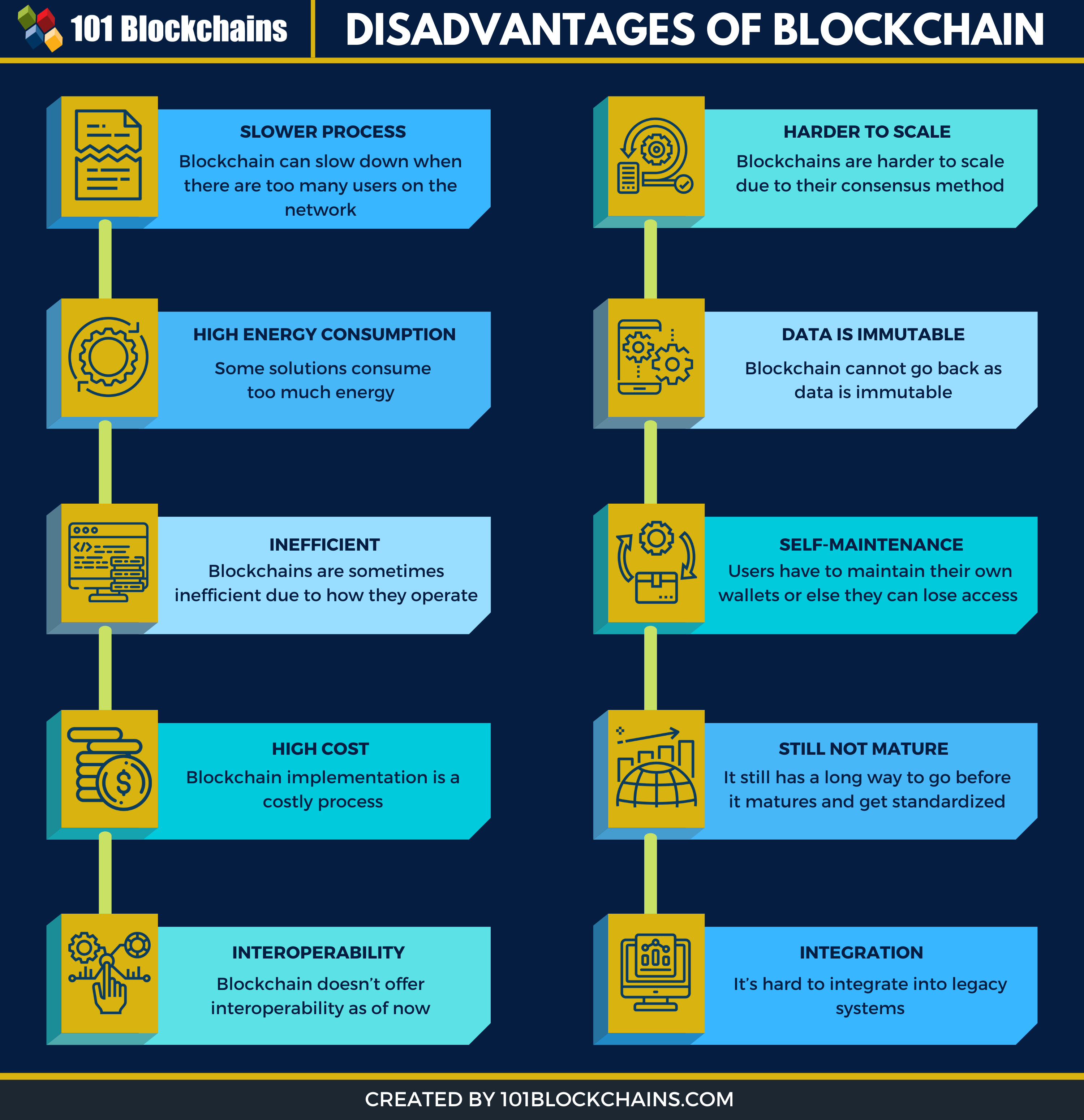 1. Blockchain is not a Distributed Computing System

Clearly, blockchain might be a distributed network, but it lacks the features that make a distributed computing system so beneficial for the corporations.

2. Scalability Is An Issue

Blockchains are not scalable as their counterpart centralized system. If you have used the Bitcoin network, then you would know that the transactions are completed depending on the network congestion. This problem is related to scalability issues with blockchain networks. In simple words, the more people or nodes join the network, the chances of slowing down is more!

However, there has been an increasing change in how blockchain technology works. With the right evolution of the technology, scalability options are being integrated with the Bitcoin network as well. The solution is to do transactions off-blockchain and only use blockchain to store and access information.

Most read: The Future of Blockchain and Market Disruptors | Deloitte US

Other than that, there are also new ways of solving scalability, including permissioned networks or using a different architectural blockchain solution such as Corda.

Lastly, we can say that blockchain might not be still well-equipped for real-world applications. It still needs significant improvement before it can be adopted in day-to-day life.

3. Some Blockchain Solutions Consume Too Much Energy

Every time the ledger is updated with a new transaction, the miners need to solve the problems which means spending a lot of energy. However, not all blockchain solutions work in the same manner. There are other consensus algorithms that have solved the problem. For example, permissioned or private networks do not have these problems as the number of nodes within the network is limited. Also, as there is no need for global consensus, they use efficient consensus methods to reach consensus.

But, if you take the most popular blockchain network, Bitcoin, the problem still persists that needs to be solved.

In short, permissioned networks are efficient when it comes to energy consumption whereas public networks can consume a lot of energy to remain operational.

Data immutability has always been one of the biggest disadvantages of the blockchain. It is clear that multiple systems benefit from it including supply chain, financial systems, and so on. However, if you take how networks work, you should understand that this immutability can only be present if the network nodes are distributed fairly.

What I mean to say is that a blockchain network can be controlled by an entity if he owns 50% or more of the nodes — making it vulnerable.

Another problem that it suffers from is the data once written cannot be removed. Every person on the earth has the right to privacy. However, if the same person utilizes a digital platform that runs on blockchain technology, then he will be unable to remove its trace from the system when he doesn’t want it there. In simple words, there is no way, he can remove his trace, leaving privacy rights into pieces.

First of all, when I tried to set up the bitcoin miner on my system, I quickly found out that the ledger can easily cross 100’s of GBs. It was not efficient in data storage which can lead to storage problems for multiple nodes who want to become part of the network.

Clearly, there needs to be a better way to handle this as whenever the data is updated, nodes need to replicate it. Moreover, the size of the blockchain grows with more transactions and nodes. If it continues to grow, then the whole network is slowed down. This is not ideal for commercial blockchains where it is essential for the network to be fast and secure at the same time.

Blockchain technology is more secure than other platforms. However, this doesn’t mean that it is not completely secure. There are different ways the blockchain network can be compromised. Let’s go through them below one by one to make more sense out of it.

7. Users Are Their Own Bank: Private Keys

To make blockchain decentralized, it is important to give individuals the ability to act as their own bank. However, this also leads to another problem.

To access the assets or the information stored by the user in the blockchain, they need private keys. It is generated during the wallet creation process, and it is the responsibility of the user to take proper note of it. They also need to make sure that they do not share it with anyone else. If they fail to do so, their wallet is in danger. Also, if they lose the private key, they will lose access to the wallet forever. The reliance on users makes it as one of the disadvantages of blockchain.

So, if you as a user who forgets its private key, are eventually logged out of their wallet and no one can get it back. This is a serious drawback as not all users are tech-savvy and have more chances to make mistakes. If there is a centralized authority that takes care of it, then it defeats the purpose of decentralization.

The underlying cost of implementing blockchain technology is huge. Even though most of the blockchain solutions including Hyperledger are open source, they require a lot of investment from the organization that is willing to pursue it.

There are costs associated with hiring developers, managing a team that excels at different aspects of blockchain technology, licensing costs if you opt for a paid blockchain solution, and so on.

You also need to take care of the maintenance cost associated with the solution. For enterprise blockchain projects, the cost can go over a million dollars as well.

So for businesses who like the idea of blockchain, but do not have the funds or budget to carry out, might need to wait more before they can jump into the blockchain bandwagon.

Not sure how to build a career in enterprise blockchains? Enroll Now: How to Build Your Career in Enterprise Blockchains

Implementing and managing a blockchain project is hard. It requires thorough knowledge from the business to go through the whole process.

They need to hire multiple experts in the blockchain field that leads to the problem and hence it is counted as one of the disadvantages of blockchain.

Not only that they also need to train their existing professionals on how to utilize blockchain and then ensure that the management team can understand the complexities and outcomes of a blockchain-powered business.

This way, they can understand their requirements and help transform their business processes to utilize blockchain.

Not to mention, if you find blockchain developers and specialists, they are harder to find and will cost more compared to traditional developers due to their demand and supply ratio.

If you are eager to learn about Blockchain use-cases then you can check out the articles listed below.

Blockchain technology is only a decade old. This means that it is a new technology that requires time to mature. If you take the different consortium into account, you will notice multiple players trying to solve the decentralized problem with their unique solution.

Like any other new technology, maturity is another problem that blockchain has to solve, and hence it is one of the disadvantages of blockchain.

Blockchains are also not getting matured in a long time for now. There is still a lot to go before we can see changes in standardizing blockchain technology. Right now, there are too diverse solutions that aim to solve the core problems, but are not working together to standardize it.

Another disadvantage that blockchain technology suffers from is interoperability. As mentioned in the last point, there are multiple types of blockchain networks which work differently, trying to solve the DLT problem in their own unique way. This leads to interoperability issues where these chains are not able to communicate effectively.

The interoperability issue also persists when it comes to traditional systems and systems using blockchain technology.

We also have Hyperledger – an open-source initiative by The Linux Foundation trying to unify the blockchain solutions under one big umbrella. This will improve the way how enterprises adopt blockchain technology including frameworks, tools, APIs, and so on.

So, what do you think about them? Comment below and let us know.

If you’re aspiring to start a career in Blockchain, we’ve brought a Free Blockchain Fundamentals Course for you. Enroll now and start your blockchain journey today!

Most read: Scammers Stole 14 Billion in Crypto in 2021 — How Investors Can Protect Their Coins | NextAdvisor with TIME