In this article, we will go through a detailed comparison of Hashgraph vs Blockchain and understand their seminaries and differences.

If you belong to the blockchain sector, you would know that it is continually evolving at a rapid pace. There are also other similar distributed ledger technologies (DLT) to replace Blockchain by providing a better solution on the sidelines.

One such DLT is Hashgraph. It solves the distributed ledger differently and claims to be more secure, fast, and fair. That’s why we will be comparing these two technologies, Hashgraph and Blockchain — and see where they stand in the current market. Let’s get started.

Before we start and explore, we should understand the true meaning of distributed ledger technology.

Distributed ledger technology is a network of peers that communicate with each other to reach a consensus. In a DLT, every node has a copy of the ledger and is immutable in nature.

There are many DLTs out there, including the two that we are going to discuss today, i.e., Blockchain and Hashgraph. The key features of distributed ledger technology are decentralization, security, transparency, integrity, and speed. However, not all DLT’s offer all the features.

In fact, DLT can also be effective in a centralized system where a system can benefit from integrity, transparency, and speed of execution. At the core, distributed ledger technology (DLT) empowers blockchain, and blockchain empowers bitcoin.

Blockchain is one of the most popular forms of distributed ledger technology. It is the underlying technology that is used by the first every cryptocurrency out there, i.e., bitcoin. In a blockchain, peers communicate between themselves to form a peer-to-peer network.

Technically, a blockchain is a series of blocks or records. It supports the append-only structure. However, the database is immutable, which means that the data, once written, cannot be deleted or edited by anyone. The data stored in the previous blocks cannot be changed by any means.

This makes blockchain an ideal solution for current generation problems where data immutability is essential. It can be used for voting, supply chain management, and the finance industry.

It is patented by Swirlds, and no one other than a license can use it. However, we also have Hedera Hashgraph, and it is a public Hashgraph network. It has all the Hashgraph consensus algorithm features with slight changes in how it utilizes the leader format. It uses gossip about gossip and Virtual Voting as the two techniques to maintain connectivity and consensus.

Maybe you are interested: How to Mine Crypto on Laptop: Ultimate Guide 2021 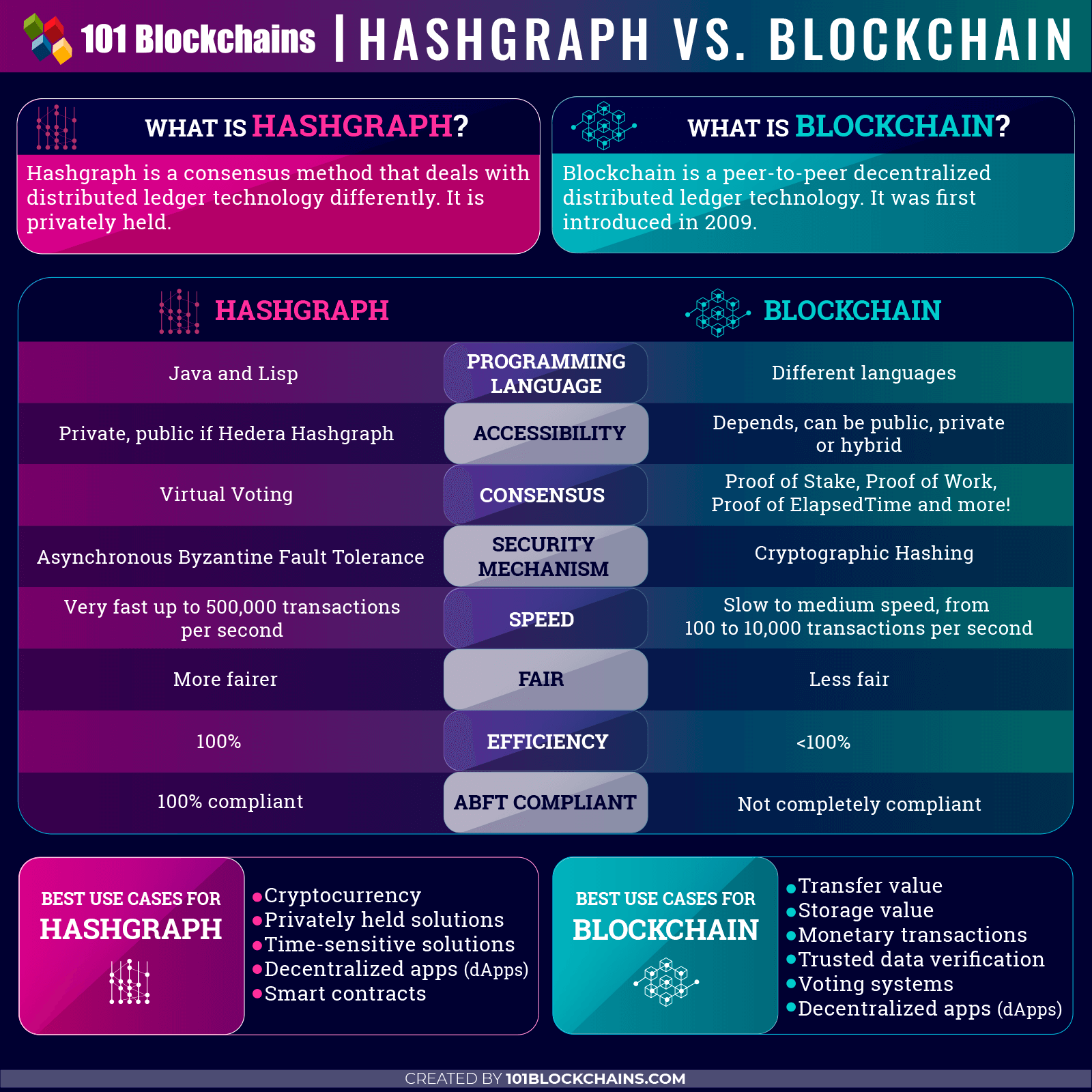 The Hashgraph is designed to offer a secure, fair, and fast network. It is implemented using Java and Lisp programming language. This also means that it also supports Solidity. One of the most significant advantages of the Hashgraph network is its speed. Now that you know what is Hashgraph let’s move on to all the significant aspects of the comparison below. Let’s get started.

Read More: Blockchain Vs Hashgraph Vs Dag Vs Holochain: Types Of DLTs

Hedera Hashgraph vs Blockchain: How Are They Different?

The most significant difference between Hashgraph and blockchain is their approach. Blockchain stores data in blocks — in a linear way. The append approach works great but is not always the way for blockchain solutions out there. Hashgraph, on the other hand, utilizes the directed acyclic graph for storing and accessing information. In both the DLTs, each node has a copy of the ledger, making it truly decentralized.

When it comes to security, both blockchain and Hashgraph stands strong. Blockchain has a different approach where they utilize cryptographic methods to ensure security for the data stored and transmitted on the network.

The digital blocks are tamper-proof and malicious actors in no way can change the integrity of the data. For example, if someone tampers with the data, the signature becomes invalid, which alarms the nodes of a possible breach or malicious activity.

Hashgraph utilizes Asynchronous Byzantine Fault Tolerance (aBFT) to secure the network from bad actors. Each of the events is recorded correctly, and the approach makes sure that no data can tamper even when the network has some malicious actors.

Just like blockchain, a transaction, once completed, cannot be changed or edited in any possible way. This also means that it is secure from a 51% attack. The Hedera Hashgraph, on the other hand, has made a slight change in how they use aBFT. The consensus algorithm doesn’t use a leader format to ensure that DDoS attacks don’t hamper the network. In our Hedera Hashgraph vs Blockchain, we think that both of them offers.

Blockchain doesn’t have a single approach to consensus. It depends on the cryptocurrency or platform. There are many popular consensus algorithms used in blockchain. Few of them include Proof-of-Work, Proof-of-Stake, Proof-of-Elapsed Time, and so on. NEO, yet another popular blockchain solution, utilizes delegated Byzantine Fault Tolerance. It is an improved consensus algorithm that learns from PoF and PoS.

Hashgraph or Hedera Hashgraph, on the other hand, uses virtual voting as the form of gaining network consensus. Hashgraph, itself, is a consensus algorithm, but it does have a lot to offer if we see finer details.

Blockchain’s speed varies depending on the solution (cryptocurrency, platform, etc.). However, it is comparatively slower to Hashgraph. Theoretically, Hashgraph can reach a speed of 5,00,000 transactions per second. Practically that may change depending on other factors. Blockchain solutions such as Bitcoin, Ethereum, etc., are considerably slow and can offer a speed of only 100 to 10,000 transactions per second.

Hashgraph Gossip method is the reason behind its speed. With it, less information needs to be propagated across the network as more event takes place.

Blockchain is less fair when it comes to miners or users. The miner has more power when it comes to selecting orders he wants to process, their order, and even stop transactions. This is not fair to anyone who is directly or indirectly connected to the network.

Hashgraph handles fairness differently, where it allocates nodes randomly. It also utilizes consensus time stamping, which means that no individual is affected due to the order of the transactions. However, the concept of fairness is still vague and is not adequately explained in the Hashgraph whitepaper. It is one of the important aspects of Hashgraph vs Blockchain comparison.

Maybe you are interested: How much does it cost to run an exchange? – QODEN

Hashgraph is 100% efficient due to its approach. Blockchain’s block approach makes it hard for miners to work on a block. There are instances when two blocks are mined at the same time. This means that the miner’s community now needs to decide on one block, which means that the other block is discarded. In the end, the effort of the miners is wasted, resulting in a less efficient network. As Hashgraph doesn’t have to rely on block creation, but only events, it doesn’t suffer from the problem.

When it comes to the adoption and development stage, blockchain beats Hashgraph easily. Blockchain is almost a decade old, and it reaps the benefits from first to market. It has seen many attempts at perfection – such as the release of Ethereum that supports dApps and smart contracts. Specific blockchain solutions such as NEO, VeChain, etc., also started to surface.

Hashgraph, on the other hand, is not near to the adoption rate of blockchain. Firstly, it is a patented technology. The public variant, Hedera Hashgraph, is still in active development. At the time of writing, it is used by 300+ companies, which may seem a lot, but less compared to companies that are using blockchain technologies.

Also Read: Blockchain Vs Hashgraph: Who Wins The Dual?

DAG: Another Take on Distributed Ledgers

Hashgraph is not the only effort to correct the limitations of blockchain. Developers are focusing on the data structure of distributed ledger technology networks that affect their effectiveness. Similarly, directed acyclic graphs (DAG) employ a different data structure that brings about more consensus.

In particular, DAG is a type of distributed ledger technology that relies on consensus algorithms. Consensus algorithms operate in a way that transactions that prevail simply require majority support within the network. In such a network, there is much more cooperation, teamwork, and nodes have equal rights.

Unlike traditional blockchain technologies, where proof of work is key, DAG ensures that there is fairness. This kind of fairness gives the impression that the network sticks to distributed ledger technology’s initial aim. Particularly, the main intention of a DLT was to democratize the internet economy.

Tangle is one of the prominent examples of DAG at work. So, if we compare Blockchain vs Hashgraph vs Tangle, we are practically comparing DAG with blockchain and Hashgraph.

Hashgraph vs Dag vs Blockchain

Many people are interested to know how the compassion of Hashgraph vs Dag vs Blockchain will turn out. So, to get rid of your confusion, let’s check out the table below.

Categories Blockchain Hashgraph DAG Mining Participants have the ability to mint new tokens via different consensus mechanismsNodes create consensus through Virtual VotingThe previous transaction validates the succeeding to achieve consensus Transactions per secondHighly limited in terms of scalability and TPSUnique consensus mechanisms reduce computational burden hence high scalability and high TPSUnique data structure via directed acyclic graphs ensures that scalability and TPS are high Data structureData structured in blocks in order of transactions which are validated by miners in the ecosystemVirtual voting and Gossip about Gossip ensures that transactions are validated by the majorityData structure follows the directed acyclic graph mechanism where each transaction is independent Validation of transactionsMiners have the power to postpone a transaction or cancel it entirelyValidation of transactions is as per consensusThe success of present transaction relies on its ability to validate two previous transactions Networks running on the platform Bitcoin and Ethereum are the most popular networks built on blockchainSwirlds and NOIA are the only networks on HashgraphNXT, Tangle, and ByteBall are the most popular networks using DAG foundation

You can also check out a detailed comparison guide on Blockchain vs Hashgraph vs Dag vs Holochain to understand how each of the distributed ledgers works.

There are already many companies using blockchain technology, and we believe that it’s only the start of a new era. On the other hand, Hedera Hashgraph can prevail on its own and gain popularity without replacing any other technologies.

Although blockchain does have many issues, it’s not enough to decrease the popularity of this tech.

Hashgraph is undoubtedly a more advanced technology when compared to blockchain. But that doesn’t mean it will replace blockchain. There are still projects that can utilize blockchain better than Hashgraph. Considering Hashgraph is privately held, the adoption is slowed down. We do have Hedera Hashgraph, a public Hashgraph network that can help accelerate its growth.

If you want to know more about blockchain, you must enroll for blockchain courses and certifications.