We asked our blockchain boffins Saurabh Gupta and Mayank Madhur to take a deeper look at the top 5, namely: Ethereum, Hyperledger Fabric, R3 Corda, Ripple, and Quorum. Please note that Bitcoin does not make it to our list of top 5 platforms. In fact, it does not make the top 10 list when we talk about enterprise application of Blockchain.

The objective of our research is to understand blockchain platforms that show promise in solving complex business problems: 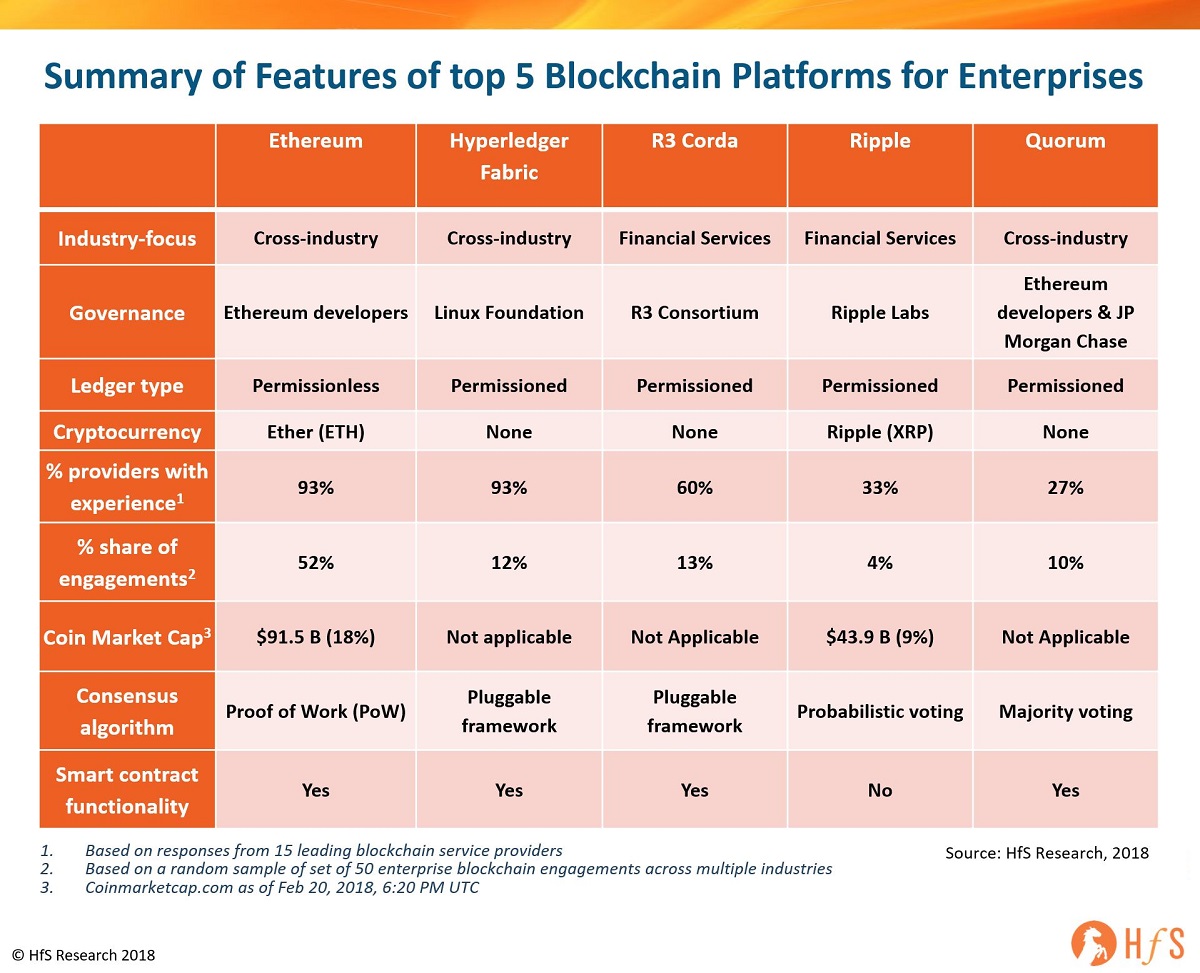 “Ethereum is a platform that makes it possible for any developer to write and distribute next-generation decentralized applications.”

Founded by the 22 year old Russian-Canadian Vitalk Buterin, Ethereum is one of the most mature blockchain platforms available today. Known for its robust smart contracting functionality and flexibility, it is used widely across multiple industry use-cases. It has the largest number of use-cases available today (50%+ in our sample set). Along with Hyperledger Fabric, Ethereum has developed a large online support community as well has frequent product updates and enhancements.

The Ethereum Enterprise Alliance (EEA), a non-profit organization is now over 250+ members strong and connects Fortune 500 enterprises, startups, academics, and technology vendors with Ethereum subject matter experts. Despite its widespread adoption in enterprise use-cases, it’s important to realize that Ethereum is essentially a permissionless (or public) platform that is designed for mass consumption versus restricted access (typical requirement for privacy requirements in enterprise use-cases). It is also PoW (proof-of-work) based which is not the fastest (resulting in potential latency issues) and is an energy-sucker. Though it might change its consensus algorithm to the fast PoS (proof-of-stake) in future versions.

“As new technology develops, there is a call for standards. Participants want to focus on time and effort and investment to build solutions versus worrying about the framework. This is the rationale for open standards…we are pulling together the most exciting portfolio with a multi-lateral developer and vendor community. It’s similar to the benefits that Linux brought to the world of operating systems.”

Hyperledger, hosted by Linux Foundation and launched in 2016, is an open-source collaborative effort to advance cross-industry blockchain technologies. One of its key goals is to create enterprise-grade distributed ledger frameworks and codebases. Hyperledger boasts 185+ collaborating enterprises across finance, banking, Internet of Things, supply chain, manufacturing and technology. Hyperledger Fabric is one of the 8 ongoing Hyperledger projects that was initially contributed by IBM and Digital Asset. It is an attractive blockchain framework for enterprise solutions, given its modular architecture, as it allows plug-and-play components around consensus and membership services. It recently announced the release of Hyperledger Fabric 1.0 that claims to be production-ready for enterprises.

“Corda has been developed to service the specific needs of financial services with generations of disparate legacy financial technology platforms that struggle to interoperate, causing inefficiencies, risk and spiraling costs.”

Launched in 2015, R3 is a consortium of some of the world’s biggest financial institutions that has created an open-source distributed ledger platform called Corda. It’s partner network has grown to 60+ companies. While Corda was designed with banking in mind, other use cases in supply chain, healthcare, trade finance, and government are emerging. There is no built-in token or cryptocurrency for Corda, and it is a permissioned blockchain as it restricts access to data within an agreement to only those explicitly entitled to it, rather than the entire network. Its consensus system takes into account the reality of managing complex financial agreements. It is also known for its focus on interoperability ease of integration with legacy systems.

Most read: Is Blockchain the Future of Entertainment? – Rolling Stone

Ripple was founded in 2012 and was renamed fromOpencoin in 2015. It aims to connect banks, payment providers, digital asset exchanges and corporates through RippleNet, with nearly-free global transactions without any chargebacks. It enables global payments through its digital asset called “Ripples or XRP” that has become one of the most popular cryptocurrency just behind Bitcoin and Ether. XRP is touted to be the faster and scalable than most other blockchains (4 seconds payment settlement versus 1+ hour in Bitcoin with the ability to 1,500 transactions per second compared to 3-6 for Bitcoin). It has 100+ customers with 75+ clients in various stages of commercial deployment across three primary use cases namely: cross-border payments (xCurrent), minimizing liquidity costs (xRapid), and to send payments across various networks (xVia).

“J.P. Morgan has long used open source software and we are excited to have this opportunity to give back to the community. Quorum is a collaborative effort and we look forward to partnering with technologists around the world to advance the state of the art for distributed ledger technology.”

Developed by J.P. Morgan leveraging Ethereum since 2015, Quorum is designed to handle use-cases requiring high-speed and high-throughput processing of private transactions, with a permissioned group of participants. It does not use the Proof of Work (PoW) consensus algorithm but uses vote-based and other algorithms enabling it to process hundreds of transactions per second, depending on how smart contracts and networks are configured. Quorum is designed to develop and evolve alongside Ethereum. It only minimally modifies Ethereum’s core, thus Quorum is able to incorporate the majority of Ethereum updates quickly and seamlessly. Just like Etherue, Quorum is also open sourced, free to use in perpetuity and encourages experimentation.

The Bottom Line: Blockchain Platforms will Consolidate and Collaborate as Enterprise Adoption Increases

The blockchain world moves at a frenetic pace of innovation with emerging new platforms, additional new features, and new releases, while ambitious enterprises are eager to get ahead of the curve with its disruptive potential

Meanwhile, enterprise adopters face challenges with a lack of standards and inter-operability issues, especially as they try and upgrade from pilots and PoCs to real production-grade environments. The whole development of the blockchain ecosystem is no dissimilar to the Internet for permissionless networks and cloud for permissioned ones, where blockchain is almost akin to TCP/IP as the architectural technology.

Like with any hyped, exciting new technology development, enterprises do not need 1,500+ different platforms and we will quickly see a handful of real players start to dominate and investors get focused and the ecosystem fleshes out. This PoV highlights the current top 5 platform players, but given the nascency of blockchain (almost all of these are merely a few years old), this will continue to evolve. and we will start to see greater collaboration between leading platforms given the market push and pulls. For example, we are already starting to see some evidence of this, with Hyperledger, Sawtooth, and Hyperledger Burrow working together to run the Ethereum Virtual Machine (EVM). The Blockchain Interoperability Alliance was also created in November 2017 to collaborate on researching interchain transactions and communications. Like with every new concept, blockchain is also going through these growing pains.

The full POV is available for free here: