Wondering why Blockchain has gained so much popularity in recent years. Here we bring the top Blockchain features that make it popular!

Blockchain technology has been around for quite some time now, still actively being in the spotlight. Even though there are some mixed feelings toward this technology, yet no one can entirely underestimate its role in the global economic landscape.

The technology first came into the spotlight through bitcoin, a much popular cryptocurrency. Sadly, now it’s become too much overrated and volatile compared to other cryptocurrencies. But what Bitcoin brought to our attention is the blockchain technology itself.

Blockchain technology isn’t just a backup network for cryptocurrencies, but it offers a lot more. So, what are the key blockchain features that makes it so irresistible? Why is it gaining so much popularity? Let’s dive in a little deeper into the features of blockchain in this guide to answer these questions. Let’s start with the quick Blockchain infographic! 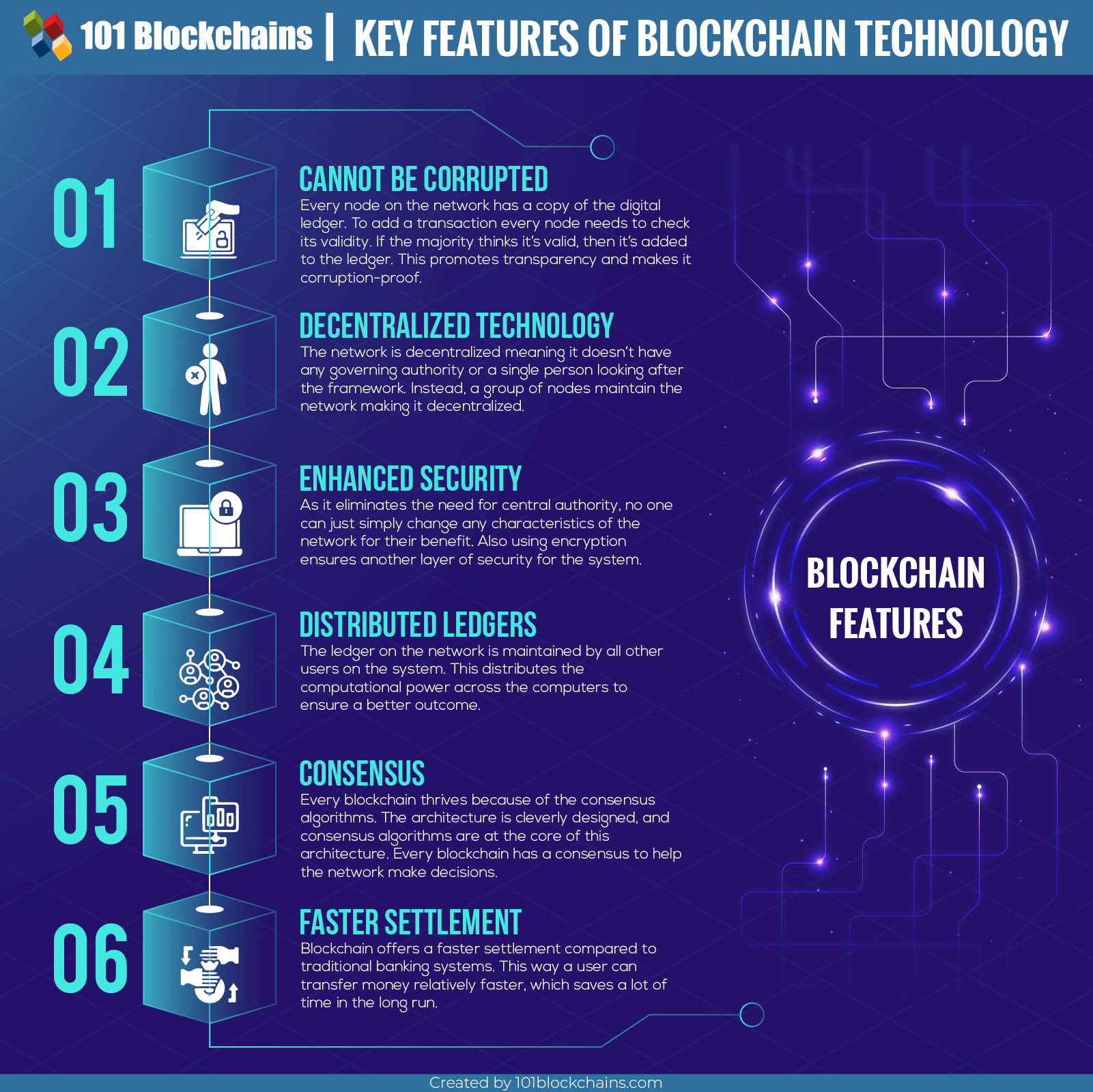 Immutability means something that can’t be changed or altered. This is one of the top blockchain features that help to ensure that the technology will remain as it is – a permanent, unalterable network. But how does it maintain that way?

Blockchain technology works slightly different than the typical banking system. Instead of relying on centralized authorities, it ensures the blockchain features through a collection of nodes.

Every node on the system has a copy of the digital ledger. To add a transaction every node needs to check its validity. If the majority thinks it’s valid, then it’s added to the ledger. This promotes transparency and makes it corruption-proof.

So, without the consent from the majority of nodes, no one can add any transaction blocks to the ledger.

Another fact, that backs up the list of key blockchain features is that, once the transaction blocks get added on the ledger, no one can just go back and change it. Thus, any user on the network won’t be able to edit, delete or update it.

How does It Fight Corruption?

We know how every year there’s a massive amount of money that gets hacked through our regular channels. Many people spend Trillions of money to protect their business from any external hacks. However, we always forget to count the internal cybersecurity risks that come from corrupted people and authorities.

In many cases, there’s always an internal link for these hacks to know about all the security measures, so in the end, we pay the price for our trust. As you all know banks aren’t that trustable now and the global economy needs a trustless environment to fully overcome this issue.

So, when it comes to a corruption-free environment, you can easily assume that blockchain can definitely change a lot of these scenarios.

If businesses start to integrate blockchain technology to maintain their internal networking system, no one would be able to hack into it or alter or even steal information.

Public blockchains are a perfect example of this. Everyone in the public blockchain can see the transactions, so it is super transparent. On the other hand, private or federated blockchain could be best for enterprises that want to remain transparent among staff and protect their sensitive information along the way from public view.

Want to know more about the working of Blockchain? Read our previous article to understand How Blockchain works.

The network is decentralized meaning it doesn’t have any governing authority or a single person looking after the framework. Rather a group of nodes maintains the network making it decentralized.

This is one of the key features of blockchain technology that works perfectly. Let me make it simpler. Blockchain puts us users in a straightforward position. As the system doesn’t require any governing authority, we can directly access it from the web and store our assets there.

You can store anything starting from cryptocurrencies, important documents, contracts or other valuable digital assets. And with the help of blockchain, you’ll have direct control over them using your private key. So, you see the decentralized structure is giving the common people their power and rights back on their assets.

Why it’s So Useful?

As it gets rid of the need for a central authority, no one can just simply change any characteristics of the network for their benefit. Using encryption ensures another layer of security for the system.

But how does it offer so much security compared to already existing techs?

Added with decentralization, cryptography lays another layer of protection for users. Cryptography is a rather complex mathematical algorithm that acts as a firewall for attacks.

Every information on the blockchain is hashed cryptographically. In simple terms, the information on the network hides the true nature of the data. For this process, any input data gets through a mathematical algorithm that produces a different kind of value, but the length is always fixed.

You could think of it as a unique identification for every data. All the blocks in the ledger come with a unique hash of its own and contain the hash of the previous block. So, changing or trying to tamper with the data will mean changing all the hash IDs. And that’s kind of impossible.

You’ll have a private key to access the data but will have a public key to make transactions.

Hashing is quite complex, and it’s impossible to alter or reverse it. No one can take a public key and come up with a private key. Also, a single change in the input could lead to a completely different ID, so small changes aren’t a luxury in the system.

If someone wants to corrupt the network, he/she would have to alter every data stored on every node in the network. There could be millions and millions of people, where everyone has the same copy of the ledger. Accessing and hacking millions of computers is next to impossible and costly.

That’s why it’s one of the best blockchain features. As it’s too hard to bypass, you won’t have to worry about hackers taking all your digital assets from you.

Most read: Is PI Network a scam providing no value to users? Possibly yes

Usually, a public ledger will provide every information about a transaction and the participant. It’s all out in the open, nowhere to hide. Although the case for private or federated blockchain is a bit different. But still, in those cases, many people can see what really goes on in the ledger.

That’s because the ledger on the network is maintained by all other users on the system. This distributed computational power across the computers to ensure a better outcome.

This is the reason it’s considered one of the blockchain essential features. The result will always be a higher efficient ledger system that can take on the traditional ones.

Why It’s One of the Blockchain Important Features?

In simple terms, the consensus is a decision-making process for the group of nodes active on the network. Here, the nodes can come to an agreement quickly and relatively faster. When millions of nodes are validating a transaction, a consensus is absolutely necessary for a system to run smoothly. You could think of it as kind of a voting system, where the majority wins, and the minority has to support it.

The consensus is responsible for the network being trustless. Nodes might not trust each other, but they can trust the algorithms that run at the core of it. That’s why every decision on the network is a winning scenario for the blockchain. It’s one of the benefits of blockchain features.

There are lots of different consensus algorithms for blockchains over the globe. Each has its own unique way to make decisions and perfecting previously introduces mistakes. The architecture creates a realm of fairness on the web.

However, to keep the decentralization going every blockchain must have a consensus algorithm, or else the core value of it is lost.

Read Now: What is the Consensus Algorithm?

These blockchain features make life easier for foreign workers and help to understand Why Blockchain is Important. Many people travel to another country in search of a better life and job and leave families behind. However, sending money to their families overseas takes a lot of time and could become fatal in times of need.

Now, blockchains are way too fast, and they can easily use it to send money to their loved ones. Another fun fact is the smart contract system. This can allow making faster settlements for any kind of contract. This is one of the best benefits of blockchain features to this day. And with the third party out of the way, people can send money with a minimal fee. Seems intriguing, right?

This way blockchain will impact the international trades too!

So, why shouldn’t you use blockchain technology? Although there are some cases where the network struggles to support too many users and faster settlement isn’t possible. Even so, many are improving this scenario, and we’ll soon see a better take on the issue.

Blockchain technology isn’t just another hype that people forget after a few days. With all its blockchain features and applications, we can safely assume that it’s here to stay. All the blockchain important features are making a whole another level of impact on the web.

And why wouldn’t it? It’s infused with all sorts of new techs. Although blockchain is giving rise to a lot of controversies, still if people can utilize the ideology behind all benefits of blockchain they can make a brighter and shinier future for everyone. Not to mention, Blockchain can change the world.

Aspiring to build a career in Blockchain. Start now with the Free Blockchain Fundamentals Course and get ahead to have a successful Blockchain career.

Most read: How Much Money Can You Make From Crypto Mining?