Looking for the best Minecraft texture packs for the Java Edition? Minecraft’s low-fi charms were predictably the first thing modders took to ‘fixing’. The ruddy textures, while distinctive, are an obvious target for an upgrade if you stare at them long enough. While Mojang has been gradually revamping the aesthetic appeal of Minecraft, particularly with the introduction of Minecraft Ray Tracing, if you’re chasing a specific look then texture packs are your best bet.

We’ve included our favourite Minecraft texture packs in one handy location. There’s nothing too crazy in here, as massive visual overhauls tend to be part of larger Minecraft mods that fundamentally change the game, but that’s another article entirely.

One thing to note is that this list of the best Minecraft texture packs is directed at the Java Edition of Minecraft, so if you’re using the newer Bedrock Edition you’re likely to run into some issues as they’re very different versions of the game. It’s also worth mentioning these Minecraft texture packs will work on the PC Game Pass version – just make sure you select the Java Edition in the new PC launcher. What we have below is a fantastic selection of texture packs that give Minecraft altered visual styles, from the ultra-realistic to the cartoonish, to far out sci-fi and subtle makeovers.

How to install Minecraft texture packs in 1.18

Not sure how to download and install one of these new texture packs? Don’t worry, we can help you with that. In the years since Minecraft first launched, it’s become a lot easier to install Minecraft texture packs and get them running with minimal fuss. 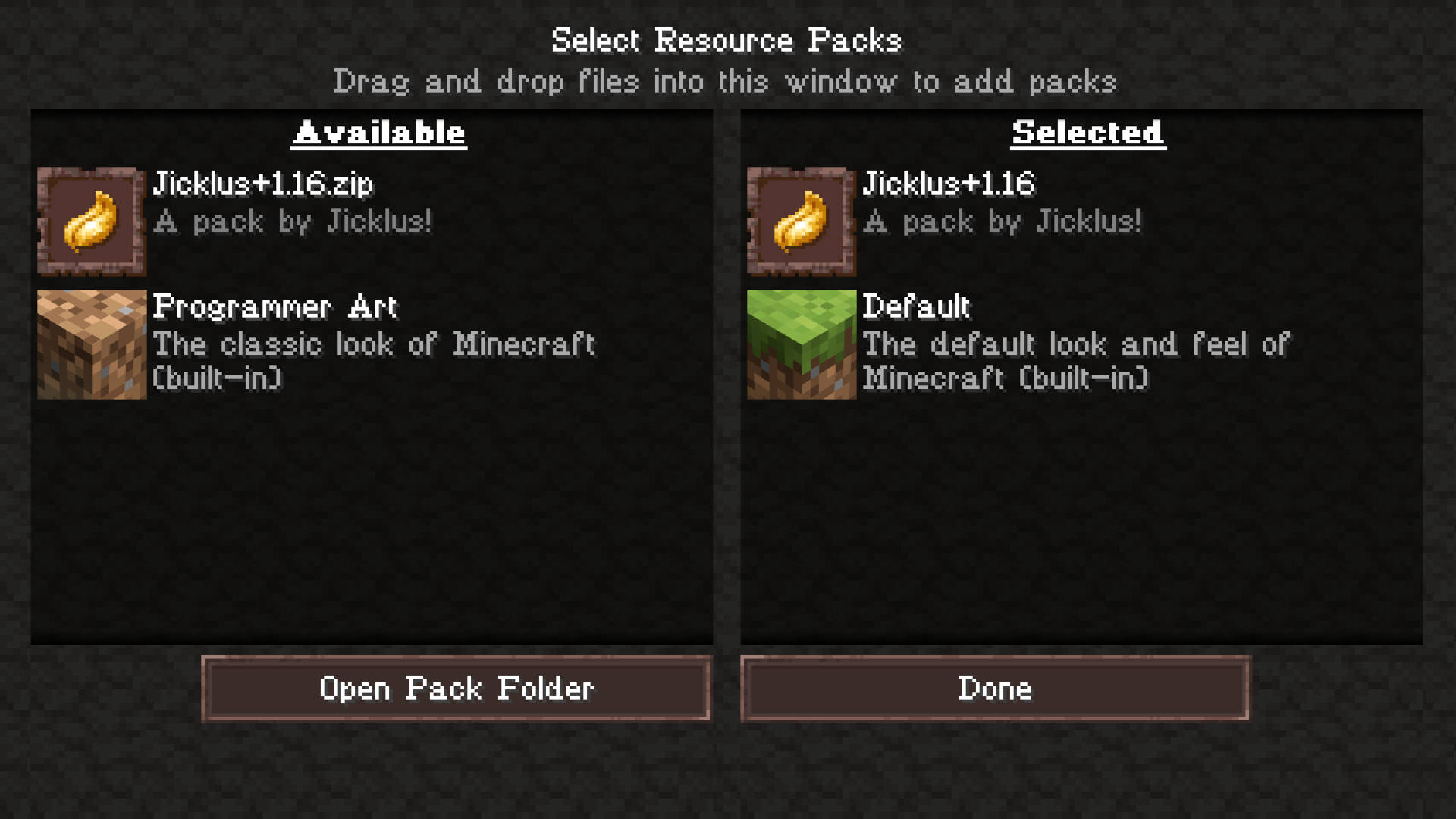 Here’s how to download and install texture packs for Minecraft:

Note that not all texture packs will work in the latest Minecraft Java Edition build, so check what the latest supported version is on the download page. If you want to use some of the best packs then you’ll need to revert your version of Minecraft to a previous version which you can do easily through the launcher. We tend to keep a couple of older Minecraft versions installed for heavily modded playthroughs.

Also, several of these texture packs require Optifine to work, so we recommend you grab the latest version before testing out the shiny new packs below.

The best Minecraft texture packs in 1.18

Okay, now that’s out of the way. Let’s start with something big and bright. We’re going to change the world, or your world, at least.

The best Minecraft resource packs in 2022 are:

There are a few packs in the wild that offer a darker or grittier theme, but Mythic turns that up to 11 with some incredibly dark fantasy vibes. It may not be obvious from the vista above as Mythic’s main changes focus on the NPC mobs and animals you can encounter along the way, but this pack is perfect for those looking to embrace the grim darkness of Minecraft.

Quadral is a bright, vibrant texture pack that doesn’t stray too far from the default Minecraft aesthetic, with simple, charming textures that give your world a visual refresh. It’s a little more soft and gentle looking than vanilla textures, and it’s 16×16 resolution like native Minecraft, so it’s a great replacement for your next survival mode adventure. It also has an add-on pack for the ‘Biomes O’Plenty’ Minecraft mod, so you can explore modded biomes in the same Quadral style.

You’d be forgiven for thinking there’s absolutely no difference between these screenshots – but look closely, and you’ll see there’s a little more detail in every cube. This is because Faithful is a 32×32 version of the default Minecraft texture pack, so it has double the resolution – and you’ll notice the bricks look rounder, the trees are fuller, and the grass is tuftier. Even the single egg which we are inexplicably holding looks… eggier.

Installing Anemoia is like stepping into a psychedelic, dream world. Anemoia’s vivid textures are bold and cartoony, yet soothing – with cool tones of blue, purple, and green everywhere, as if your whole map is underwater. This pack certainly embraces the surreal, with dyeable dogs, and friendly-looking alien villagers.

As you might imagine, Good Vibes transforms your Minecraft world into a cutesy wonderland, with a bright, cheerful colour palette and some adorable critter reskins. It’s a gentle, feel-good pack with smooth textures – perfect for building your next cosy abode and kicking your feet up beside the fireplace – see our Minecraft houses guide for inspiration.

Looking for that something more rustic and medieval looking? John Smith Legacy is the perfect pack for your next medieval Minecraft castle build. This one is fully up to date with Minecraft 1.18.1, and even had a Bedrock version for those looking to play with that build of the game.

The pack is being maintained by someone else now who has created their own spin-off version, known as the JimStoneCraft edition. It uses smoother textures and is the version the pack owner personally uses, but they keep the legacy version around for its popularity, as is right.

Annahstas Beastrinia is a Minecraft resource pack designed to reproduce the Minecraft Pokémon/Pixelmon aesthetic. Its textures are extra detailed, thanks to its 32x resolution – and its colour palette is soft, focusing on low saturated colours. There are even Pokéballs in every bookcase.

Most read: Can you tame mountain goats in Minecraft?

Jicklus’ pack isn’t too different from Minecraft’s default look – it makes everything look a little warmer, like a wash of rustic sepia – there’s an elegant hotbar, too, and various mob reskins. Just look at the adorable Highland cow above. How could you not warm up to that woolly face? It’s perfect for a fantasy or RPG-style map, or simply building a relaxing Minecraft farm with slightly different lifestock.

Sapixcraft is a bright, eye-catching Minecraft resource pack in a range of resolutions – we’ve gone for 32x, but resolutions all the way up to 512x are available via their website. The pack is clean and incredibly vibrant, making it easy to distinguish between blocks. There’s even a Christmas addon for the festive season.

Jolicraft has been a fan-favourite Minecraft texture pack for years, and it’s easy to see why – the ‘whimsical texture pack’ has buckets of charm. A lot of Minecraft texture packs have a theme that they try to nail, but Joli’s is about personal expression. It’s a sort of twee fantasy world that best reflects his own happy demeanour: the swirling sun is definitely a sight more cheerful than the default, squat square. Jolicraft feels like walking along a beach on a warm summer’s day.

Throw a splash of bright paint over your Minecraft worlds – Bloom, Bright and Retro is an eye-catching resource pack that turns your textures up to 11, in a high-contrast, old-school Nintendo style. There’s also an add-on that will let you wield The Master Sword from Zelda, so you can go and save the realm like the hero you were born to be.

We’re going even further back in time with this Minecraft texture pack – RetroNES is one of the coolest resource packs around, with a lovingly crafted old-school colour palette and chunky black outlines. The original artist stopped working on it a while ago, but thankfully, it’s been recently revived and updated for 1.16 – though if you want the retro sound pack to go with it, you’ll have to stick to version 1.8.

If you’re looking for something a little more realistic, but still retaining the quintessential Minecraft vibe, Epic Adventures is right up your cobblestone alley. Its 32x resolution means it has double the detail – that’s some mighty fine looking bark, we must say. Not to mention the gloriously detailed moon. The real star of the show, though, is that extra fluffy tree. 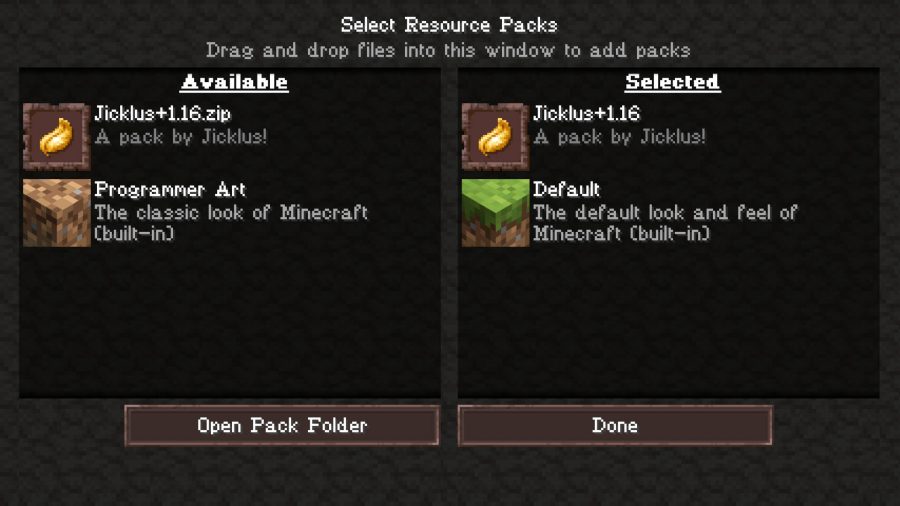 Of course, to complete the overhaul we recommend you kit yourself out with a shiny new skin – see our guide to the best Minecraft skins. Not sure what to build next? Read our Minecraft ideas guide to get some inspiration.

Most read: How to Find Minecraft Screenshots