One of the most important aspects of Clashing, and Clashing well, is protecting your trophies and loot.

It all hinges on your base and how it’s designed. Outside of having a great strategy for offensive attacks, defensive layouts offer you the chance to protect resources you’ve produced or raided.

See more: How to build clash of clans base

A poorly constructed base can give your enemies easy access to your loot, your trophies, or your war stars, while a well-designed base can protect vital resources and keep your enemies (and their goblins) out.

Here are our expert tips to keeping all your best stuff under lock and key. 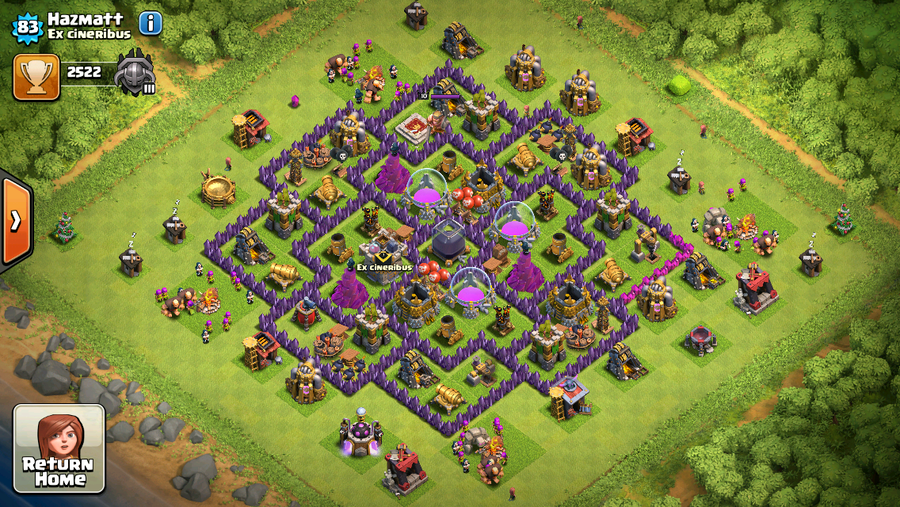 When considering your base design, knowing what to protect and what not to protect is critical.

As a general rule, your defences and storages should all be in a protected position inside the walls while other structures, such as army camps, should never be inside your walls. Think of your base as a dart board with the bullseye being the most protected portion of your base.

What’s in the bullseye? Town Hall – Depending on your strategy, you can either place your Town Hall inside or outside your walls. In trophy mode, your TH is the bullseye. It’s the building you want to protect the most of any other. Destroying it is the difference between a 1-star and 2-3 star attacks.

For trophy hunting, your town hall should be inside your walls in the centre of your base and well protected by defences. In farming mode (solely focusing on resources to build your village), your TH should be placed outside your walls in the corner. This gives any invading enemy the chance for easy trophies while leaving your precious resource storages intact.

Storages – Unless you are designing a war base or in a full scale trophy push, your storages are the most important building to protect. Of the storages, the most important resource in the game is dark elixir. Outside of your TH, dark elixir storage should be your most protected building. It should be at the centre of your base, well insulated with defences. No exceptions.

Most read: How to Reset a Minecraft Server World – Glimpse Blog

Other storages should be placed within your walls with defences (preferably splash) nearby for protection. Storages should be spaced throughout your base and not in a central location. One critical mistake that many players make is placing all of their storages together in the centre of their base.

A skilled raider will easily gain access to the centre of the base, thus stealing all of the resources. Spreading out storages makes it more difficult to steal all available loot. 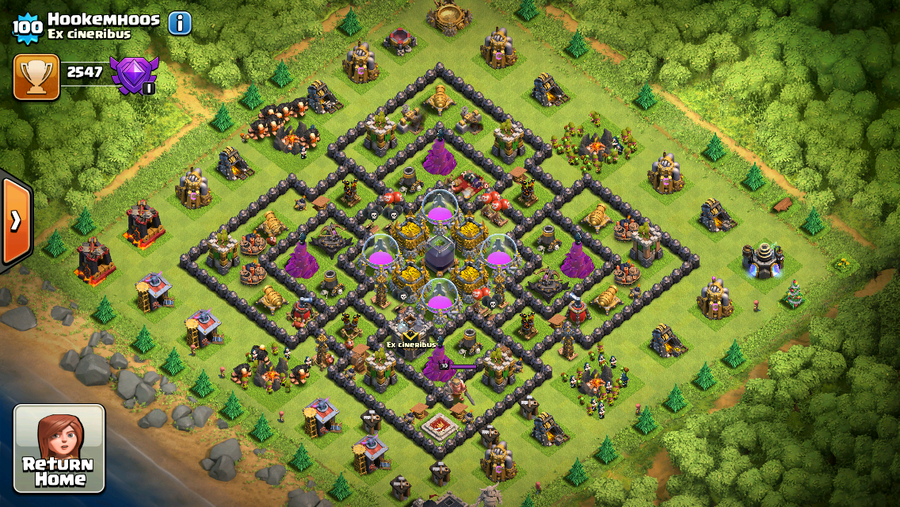 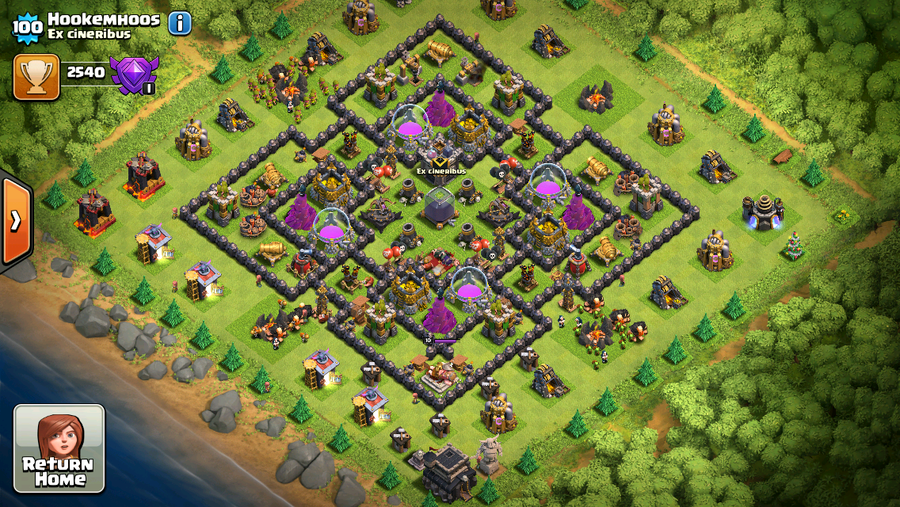 Clan Castle – Your clan castle should be viewed as both a defensive building and a storage. Your clan castle allows you to add an extra layer of protection with clan troops (provided you are in a clan) and also hold all war loot.

A suggested placement for your clan castle is in the middle of your base near your dark elixir storage. This will make it more difficult to release the clan castle troops pre-attack and also ensure that your loot is well protected.

Inner most layer of defence just outside the bullseye

Just outside of your most protected buildings, you should place your first line of defence. These defences include those that do splash damage or high levels of damage.

Mortar – Mortars defences provide splash damage to multiple targets. Mortars have a wide attack range and should be placed in the innermost portion of your base. This will allow them attack and destroy groups of troops (such as archers) from afar. X-Bow & Inferno Tower – Xbow and inferno towers should almost always be placed towards the centre of your base. Both of these defences provide high levels of damage to any invading troops and are extremely value in protecting your loot. Hidden Tesla – At town hall 7 and above, you have access to hidden tesla. These defensive buildings provide surprise defence against raiding troops. In farming mode, placement of tesla near storages provides extra defensive support. In trophy mode, teslas should be placed near your town hall. Mid level layer of defence

Just outside of your mortars, you should have defences that act as the 2nd layer of defence after archer towers and cannons (discussed below). 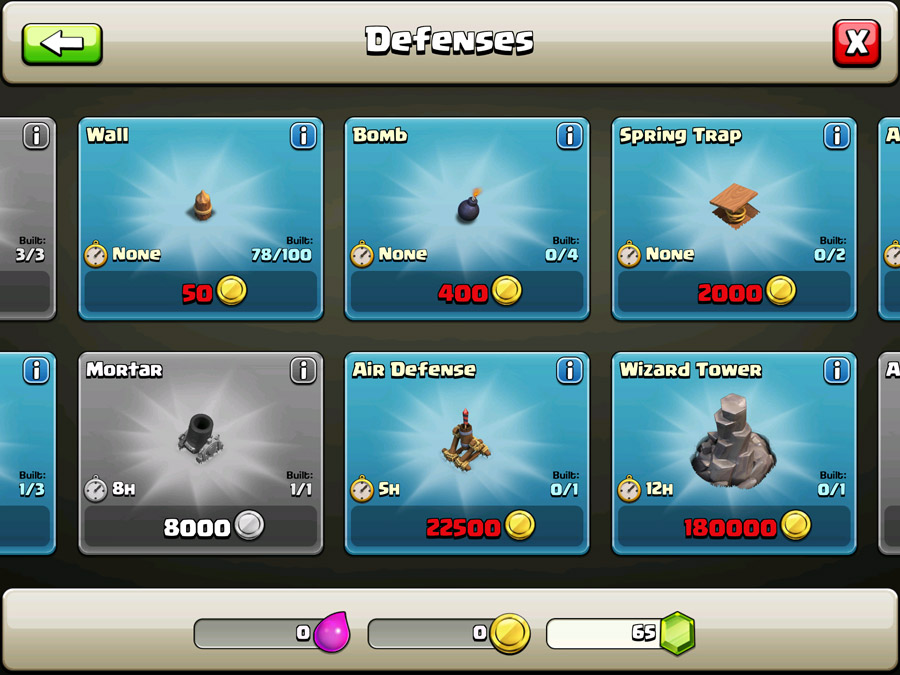 Wizard Tower – Wizard towers deal splash damage to multiple targets, but have a narrow range for attack. Suggested placement is in the 2nd layer of defence (behind archer towers and cannons) and near storages for farming bases. Placement near storages will allow them to quickly destroy groups of troops such as archers, barbs, and goblins. Air defence & Air Sweeper – Air defences serve only one purpose: attacking air troops. They are incredibly destructive to air units, but merely act as an obstacle to any ground unit. Suggested placement is scattered throughout the inner layers your base giving maximum defensive coverage should you be attacked from air.

Note: for early town hall levels outside of war, air attacks are much less common than ground attacks, thus air defences are not as important for protection and can be placed towards the outer layers of your base for distraction.

Heroes – Placing your heroes inside your walls adds an extra layer of defence. They should be placed within the walls behind the first layer of defensive buildings like cannons and archer towers. Outer rings of defence

Most read: Quick Answer: How To Get More Army Camps In Clash Of Clans – BikeHike

The outer most portion of your base should have your first layer of defence. These defences should have a wide radius for attack so that they can start destroying enemy troops early.

Cannon & Archer Tower – These defences provide single target damage and have a wide radius for their attack range. Suggested placement for these units is just within your walls to act as the first layer of defence. Everything else Traps – Well placed traps are essential to a good defence. Scattering your traps around your layout will increase the likelihood that enemy troops trigger them. After observing attacks on your base, you should be able to know where troops are often likely to travel. Adjust your traps accordingly. Army Camp, Barracks, Laboratory, Spell Factory, Collectors, Builder’s Huts – All of these buildings are nothing more than obstacles for invading troops. Assuming you regularly collect resources from your collectors, these buildings should be placed outside of your wall as a distraction for troops such as barbarians, archers, and wizards.

These obstacles can be spaced from the wall, but in range of defences. While invading troops are occupied with them as distractions, your defences will have more time to destroy them.

Walls – Regardless of whether you’re farming or trophy hunting, walls one of your biggest assets. Walls are your first line of defence and can provide your defences valuable extra time against invading troops. There are several strategies for wall layouts: One layer 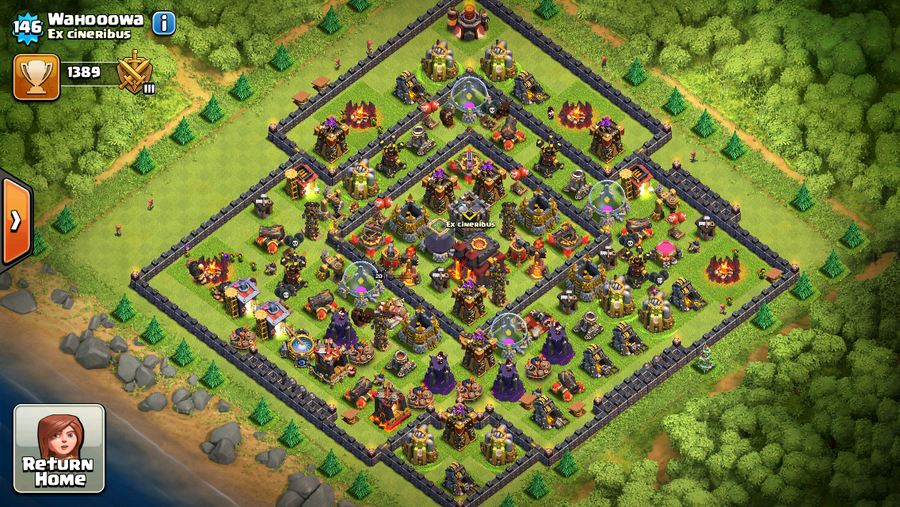 This design uses a single layer of wall to prevent troops from accessing the main portions of the base. Think of it as a fence around a house.

Typically this “fence” is used with an inner fence protecting your most valuable resources.

This type of base is usually fairly easy to penetrate with any raiding army that has wall breakers, especially for early town levels. 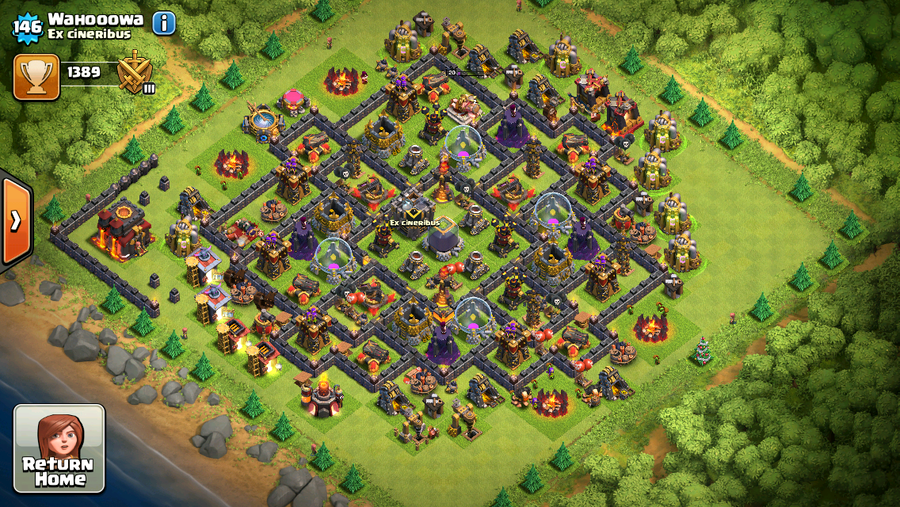 This design uses walls to create many separate compartments containing one to several buildings within the base.

The advantage of this design is that it slows attacking troops down significantly while they are moving from one compartment to another leaving time for your defences to destroy them.

The disadvantage to this method is that it requires a majority of your walls sometimes meaning you must make a choice of what to keep inside and outside of your base.

Maybe you are interested: How to Kill all Mobs in Minecraft Using 1 Simple Command

Tips! Spread out your storages – Don’t place any one defence directly next to the same defence. Spread them out! Watch replays and update your base – Use the replays of attacks on your base to help improve your defence and keep the next raider out.