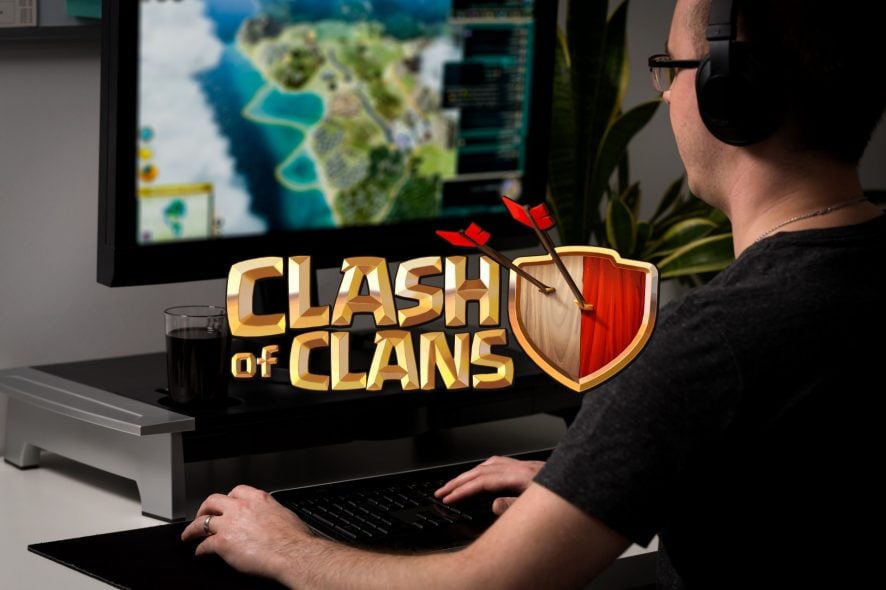 Clash of Clans is a very interesting and addictive fantasy strategy game for Android and iOS. As a player, you take on the role of a village leader. You need to manage and coordinate the village inhabitants and help them build their own town.

This is where the challenging part comes up: your village needs to attack other players in order to gain access to more resources, and especially gold, elixir, and dark elixir.

See more: Games like clash of clans for pc

Collaboration features are also supported: players can join their teams to create clans, back each other up with troops and resources when necessary, and more.

As we already mentioned, Clash of Clans is only available on Android and iOS so you will need good emulator software to play without issues.

If you’re a PC gamer and you want to play this game on your machine or maybe other games that are similar to Clash of Clans, then this article is for you.

How to set up your PC to play games like CoC

Enjoy hundreds of Android games, available now on the PC. Most of the games are free to play, some are available to buy, but all of them will run smoothly and effortlessly for the best gaming experience.

You are all set, hopefully, LD Player is your cup of tea because there is a long list of games like Clash of Clans to be played on your PC.

What are the best games like Clash of Clans for PC?

Age of Empires II is a real-time strategy game that explores exciting storylines from the Middle Ages and 1,000 years of human history.

In the beginning, the game puts you in control of a few villagers, some herdable animals, and resources. The goal is to progress and build the most powerful civilization on the map.

Depending on the type of game you opt for, the rules will differ. Moreover, you can play against AI or human opponents.

Besides a wide range of options when it comes both to the way you’ll manage your city’s resources, and how you choose to use diplomacy with your neighbors, Age of Empires II will offer you countless hours of fun.

Age of Empires II features a fully remastered soundtrack and impressive 4K Ultra HD graphics. There are 3 new campaigns, as well as 4 new civilizations, putting at your disposal a total of 35 different civilizations.

All the elements we mentioned above made us choose this game as the top contender for games similar to Clash of Clans.

Even though this game has changed since the early stages, Age of Empires II is bound to offer older gamers some level of nostalgia while exploring the well-developed maps and challenges from this game, which from our point of view, is a plus.

Most read: Is Minecraft OK & Suitable for 7 Year Olds? How Appropriate is it?

⇒ Get Age of Empires II on G2A

If you want to try it out, the strategy game is available on multiple platforms, including on Green Man Gaming and Kinguin.

Created by Sid Meier and designed by Soren Johnson, this a turn-based strategy game in which players need to build a powerful civilization using the resources they have.

You start from a humble beginning, with a small group of settlers by your side, in the middle of an unexplored world. From there, you will meet with other civilizations, and you will either help each other or fight for world domination.

In this version of the game, players will enjoy fresh features like new technologies and units, as well as new ways they can control their cities and government.

Besides the newly-added elements, Civilization VI offers a very life-like overall gaming experience, while allowing you to explore the deepest intricacies of diplomacy, resource management, development pace, and others.

This fact makes Civilization VI a bit more complex than the previously-mentioned game, and an even bigger one in terms of comparison with Clash of Clans.

But. because the devil is in the details, this game promises people a real challenge and thus a more satisfactory experience overall, when tasks and missions are completed. If you’re up for a challenge, this game is clearly worth a try.

If you want to play Sid Meier’s Civilization VI and enjoy these improvements, you can find it also on Kinguin.

Developed by The Creative Assembly, Total War: ROME II Spartan Edition is a strategy game where players can discover the wonders of the Ancient Greek and Roman worlds.

You begin the game by forming an army and recruiting the members you want to fight along with. Through battles, you can sharpen your skills and this version allows you to assign traits to legions once they gain experience.

Thanks to the real-time strategy battle systems combined with the captivating visuals – you will be completely immersed in this exciting empire-building adventure.

Total War focuses more on the battle-side of things, and besides the extensive and enveloping fighting engines, focuses more on strategies for battles and coordination than management of resources and diplomacy.

If you’re more inclined to enjoy the challenging world of battle strategies, this is by far the best option. If you would like a more diplomacy-based experience, then the previous games we presented in this list will suit your needs.

Total War Battles: Kingdom is a world strategy game where players need to build their kingdom, defend against enemies, and conquer other kingdoms through combat.

The most interesting part of the game is finding new strategies to defeat rival lords in order to gain more power and expand, while another important element will be your capability to cooperate with other players and band up against common enemies.

Your abilities to use the game mechanics to your advantage and the experience of your troops will determine your success, but it is also extremely important to cover other elements like diplomacy, resource management, prioritization of tasks, and others.

Even though, as the game title suggests, this game focuses more on the battle elements, it can be classified as balanced when compared to other options presented in this list.

The game is compatible with Windows Vista 32-bit Service Pack 2 and requires 2 GB of available space. You can download it also from Kinguin.

Speaking of resources, from time to time, you’re going to battle monsters and other bosses. Kill them as soon as possible and then capture all the resources that you can from them.

If you really like to compete against other players, Lords Mobile also offers you the chance to take part in various contests. Be the first to capture a location on the map and the prize and resources are all yours.

Are you curious to play Lords Mobile? Then download the game for free using BlueStacks.

Now. it is safe to say that not only have the possibility to choose a perfectly fitting game from this list, but you also understand what principles were taken into consideration when choosing them.

As soon as you make a choice, simply download BlueStacks on your PC to enjoy hours on end of fun strategy quests and challenging adventures.

However, if Bluestacks is not your cup of tea, we also have an excellent list that includes the best Android emulators for your PC and you will surely find a match.

Do you know any other PC games like Clash of Clans? Feel free to recommend them in the comments section below.

Most read: How to Make Signs in Minecraft: Materials, Crafting Guide, Uses